Many a contemporary playwright and screenwriter have returned to fairy tales for inspiration, creating new ways to tell stories we’ve all our lives.

South Coast Repertory has already produced Banks’ “Pinocchio” and “Robin Hood.” Now, and just in time for the holidays, the company brings his “Snow White” to the SCR Julianne Argyros Stage.

The Banks versions of “The Jungle Book” and “The Hobbit” feature the use of smaller casts – in both cases, five actors. His “Snow White” really pares things down, with a cast of two playing all 14 of the story’s characters.

If you think that’s a tall order, you see things as “Dwarf Four” does. SCR’s staging starts with Candace Nicholas-Lippman getting the ball rolling before castmate Derek Manson interrupts the play, protesting that “you can’t tell the story on your own.”

To be more exact, the tale can’t be told by just two thespians. The pair next engage in a dispute as to whether this is possible, agreeing to leave the decision up to the audience.

Naturally, our vote is a resounding “yes.” Nicholas-Lippman then assures us we’ll be seeing “what really happened” and insists this “is not a fairy tale – it’s real.”

And so the two actors, under the direction of H. Adam Harris, take us back to the birth of the girl whose hair is black, lips are red, and has a heart “as pure as snow.”

Her mother’s abrupt death leads dad to remarry a woman who’s “proud and arrogant,” with Lippman-Harris showing us the gleeful vanity of Snow’s new stepmom, who indulges in her own beauty.

The evil queen also uses a magic mirror, asking the same question – “Who’s the fairest one of all?” – and always expecting the same answer (herself).

Shocked to learn that her lovely stepdaughter is the land’s most beautiful person, she confines her to the castle and later sets out to have her killed.

In Harris’ tight, fast-moving staging, Nicholas-Lippman and Manson hold our interest by offering broad sketches of the story’s many characters.

Nicholas-Lippman’s plucky Snow White smiles and demonstrates good cheer even when lonely or discouraged. By contrast, the actress depicts the evil stepmother’s imperious, regal bearing, defining the character’s “rage” toward Snow White less as anger and more as moxie and a stubborn defiance of reality.

Other personas emerge, as when the queen disguises herself as an ancient peddler roaming the woods selling apples, Nicholas-Lippman adopting an exotic accent, or in her portrayal of the boisterous, cocky prince who happens upon the cabin in the woods.

In his actor persona, Manson at first shows trepidation at the seemingly impossible undertaking this version poses. His reluctance resurfaces when Snow White finds the cottage of the seven dwarfs deep in the forest, with Manson breaking the action and refusing to try to portray all seven of the little men.

In scenes requiring Snow White and the queen, Manson takes over as the girl opposite Nicholas-Lippman as her stepmother.

Gentle humor is a hallmark of playwright Banks’ script, SCR’s staging and Harris’ direction. The witty script keeps things moving while offering solid lines, as when the queen insists, “I don’t have to be nice – I’m beautiful,” and kids will enjoy the script’s plethora of knock-knock jokes.

Banks’ stripped-down treatment of the story makes this staging less busy, so more accessible to young audiences. Family-friendly through and through, it’s sure to hold kids’ interest and even captivate them.

And, by the way this version frames and depicts the violence and other dark terrors prevalent in most fairy tales, it makes them palatable and therefore less frightening to children.

A subtle lesson to kids is that they should make every effort to be tolerant of and kind to each other, teaching them the value of cooperating, getting along with others, and adjusting to change and to unexpected events and situations.

And, as Snow White comes to realize, the world outside of the castle isn’t the horrible, ugly place the queen has painted it to be – it’s filled with beauty, life, light and hope.

Fred Kinney’s all-purpose set design has a generic look that serves the story’s various locales. One of its finest effects is a great-looking full harvest moon that’s huge, deep red, and impressively realistic.

This version of the classic is lighthearted, fun and easy to like – not too over-the-top nor excessively lively. And instead of hearing the typical, traditional storybook ending in which Snow White marries the prince and lives happily ever after, we’re instead given her side of the story – the version she wants us to hear.

This is an admirably pleasant retelling of the “Snow White” story ideal for young audiences, unassailable by and impervious to any traditional criticisms.

SCR’s staging shows and proves the power of imagination – what is essentially the magic of theater. That makes this a great version of “Snow White” through which to introduce your kids to the world of theater. 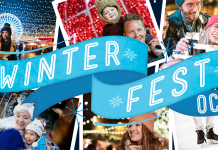