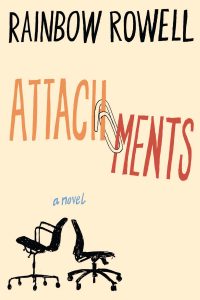 In between evaluating which mementos should be taken along to college and which should be relegated to a dusty garage storage shrine, while also attempting to plan for an upcoming winter unlike any experienced by California natives, and embarking on a days-long farewell tour, it is once again time to select a title for the newest installment of the Under Cover Book Club.

I have many thought-provoking, well-written books just waiting to get the nod and make it into my reading rotation, but early summer, as one is about to embark on a near 30-hour road trip, is a time that requires a certain type of book.

The long hours spent seeing to the needs of everyone else in the car dictate that nothing too heavy need apply. A story that requires a strong mental commitment will get lost among the gas stops, potty breaks, and backseat refereeing.

Likewise, anything that is overly emotional may well destroy the all too delicate mental balance of a mother preparing to leave her firstborn behind. Let’s be honest—that return trip will already be a teary one, no need to add fuel to that particular fire.

So, it seems that a fluffy “beach read” will likely be this month’s best selection. However, I’m sort of a book snob, and despise the unintelligent drivel that is often packaged and sold under the genre “Chick Lit,” so finding a light read often proves to be a challenge.

Hopefully, I have found the solution to this dilemma in the Under Cover Book Club selection for July: “Attachments,” by Rainbow Rowell.

Known for her award-winning young adult novels, Rowell brings us a tale that is at once an homage to adult female

Beth and Jennifer work together in a newsroom, and are fully aware of the company’s policy about sending personal emails over the newsroom server. They know that in an attempt to weed out inappropriate communiques, the powers that be have hired a virtual hall monitor of sorts—someone who, playing the role of Big Brother, will be reading employee emails and flagging those deemed less than professional.

The ladies, however, unfazed by the protocol, continue to carry on as they always have, communicating through a series of emails that dishes on every aspect of their lives, from the frustrations of Beth with her current boyfriend to the exploits of Jennifer’s baby-hungry husband, along with a healthy dose of workplace gossip.

On the other side of the coin is Lincoln, the aforementioned hall monitor. When he accepted the position as “Internet Security Officer,” he envisioned himself thwarting hackers, and securing sensitive news information, never dreaming that his job would basically boil down to chastising colleagues for forwarding dirty jokes.

As he monitors the flagged emails, however he finds himself drawn to the missives sent between Beth and Jennifer. While clearly violating company policy, he doesn’t report them, instead, continuing to read each new installment, and in the process, falling in love with Beth, a woman he knows solely through her online correspondence.

As you can imagine, this creates quite a dilemma. How does one go about meeting the person they are interested in, and whose private emails they have been reading, without coming off as a certified stalker?

Fellow author Jodi Picoult praises the book for having “Cracking, laugh-out-loud dialogue, and characters that feel painfully real.” As this debut novel is what propelled Rowell to the successful career she now enjoys, I have no doubt that this is the case.

“Attachments” seems to be just what the doctor ordered: a book that will allow me to see my own friendships reflected in that of these two women, while laughing at the awkwardness of their situation, instead of focusing on the fact that a large chunk of my heart will now be living 14 hours away.

I hope you will join me in my blatant bit of escapism, even if you have nothing particular to escape.