That cautionary “prescription” comes from avid surfer Bryan Doonan, a sports medicine and family physician who sees more surf-and-sun related injuries in his Newport Center walk-in clinic at 360 San Miguel, than just about any other seasonal malady.

Well before Doonan concentrated on passing his medical boards, he was studying surfboards so seriously that in 1992 he became the National Scholastic Surfing Association Champion at age 20. He graduated from St. Louis University School of Medicine in 2000. A rarified few medical practitioners globally understand both the physical and health dynamics of this sport as well as Doonan does. He “studies” those dynamics at least once a week at 54th St.

“There are a number of hidden dangers in surfing,” Doonan said, citing the board itself as perhaps the main cause of injury, predicated both on patient records and the number of scars he earned while competing on the pro circuit after university.

“When surfing professionally, I would have to get stitches at least every three months; you could almost time it,” Doonan said. He relives his competitive past every time he sews up another surfer/patient.

“Most injuries come either from the nose of the board or the fins,” he said. That said, “Surfing is nowhere near as dangerous as skateboarding.”

Other common injuries include ligament strains to ankles, knees and shoulders – the types often treated during ski season. Body motion for both sports is similar.

Even if he never knew what a surfboard was, Doonan could tell the size of the swells by the number of visits to his emergency center. 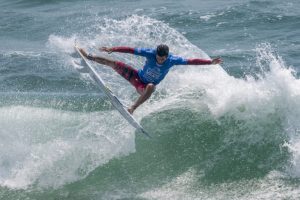 “Surfing should not be a dangerous sport,” he opined, “as long as you’re aware of simple mistakes that cause injury.” Certainly, good judgment is the number one preventative.

For those thinking about getting into the sport, Doonan recommends going to a local surf school. “Age shouldn’t be a factor,” he says, “it’s ageless. That’s the beauty of the sport.”

Knowledge of surfing enhances its enjoyment. “Educate yourself, watch world surfing contests, listen to the analysts, and familiarize yourself with the sport’s dynamics: body control, wave and weather conditions, rules of the water and surfers’ etiquette,” Doonan says. Beyond that, “Practice is critical. As with any sport, you have to keep up with it, or you lose ‘it.’”

One’s performance is enhanced by one’s overall health. Staying hydrated in any activity prevents cramping; eating enough carbs helps to avoid fatigue. Although not foremost in one’s concerns, a person potentially can suffer hypothermia, even in the heat of summer. Just a breeze that evaporates water off bare skin is sufficient over a period of time to lower core temperatures. Shivering is the first sign of hypothermia, followed by subtle, then more pronounced muscle contractions, resulting in paralysis, potential drowning, and then probable mention on the evening news.

Arguably as dangerous as anything that can happen in the surf zone is panic resulting from a perceived or real threat: a larger-than-normal swell looming up like a marching wall; a dark shark fin circling you and your board; an injury that draws blood; cramping; a rip tide that grabs you and pulls you out to sea after your board washes to shore; and worst of all…the thought of your panicked mom tearing into you for coming home after dinner has been served.

Any cuts or scrapes should be attended to within 24 hours to minimize the chance for infection, especially if that injury occurs near a river mouth or drainage outflow pipe immediately after heavy rains.

Sunburn should be a non-event with today’s wide choice of sunscreens. In other words: a beautiful surfer’s tan today, repeated visits to the dermatologist tomorrow.

Despite the aforementioned threats, “Surfing is a safe sport when all the cautions are observed and surfers are trained and aware,” Dr. Doonan emphasized, addin  “I’d rather see my surfing friends waiting for the perfect wave rather than in my waiting room.”