A local teen died Tuesday after he was ejected from a vehicle following a crash at Jamboree Road and Bristol Street, according to authorities.

Becker was the driver of a black Chevrolet Suburban headed eastbound on Bristol Street when he collided with a grey Toyota Corolla moving northbound on Jamboree Road, police reported.

The female driver of the Corolla did not require medical attention. There were no passengers in either vehicle, Manzella said.

A third vehicle (a black Porsche) was struck by debris, NBPD noted.

Newport Beach Fire Department responded and performed advanced lifesaving techniques on Becker. They continued their efforts while transporting him to the trauma center for additional medical treatment. Becker died about three hours later as a result of his injuries.

“Preliminarily, speed is believed to have been a contributing factor,” Manzella wrote in an email. “The teen who died as a result of the collision was thrown from the vehicle, but investigators will have to determine if he was wearing his seatbelt or not.”

Both of those issues will be part of the ongoing investigation over the next several weeks, she added.

Becker, a senior at Mater Dei High School in Santa Ana, was described by friends, classmates, teachers and others as a joyful young man.

He brought smiles and laughter to everyone he met, one friend recalled. He created a lot of memories with a lot of people during his time, another friend said.

“Heaven gained an angel and Orange County lost the most amazing kid ever,” wrote OCHS Confessions, a Twitter feed for Orange County teens.

“Please keep the entire Becker family in your prayers during this extremely difficult time,” the school said in an announcement.

A memorial has been set up at the intersection where the crash occurred. Friends, family members and others have left notes, flowers, photos, and lit candles in memory of Spencer Becker.

A paddle out memorial was held in his honor at the Newport Pier on Wednesday. Mater Dei remembered the high school senior during Mass on Thursday.

It is an ongoing police investigation. Police are asking anyone with information to contact Investigator Scott Grecco at (949) 644-3747 or [email protected] 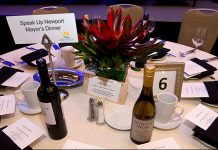