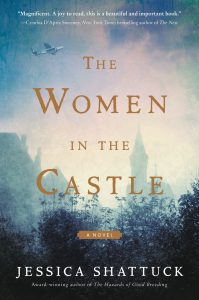 How far would you go to fulfill a promise to a friend? In the new book, “The Women in the Castle,” the answer for protagonist, Marianne, is, as far as it takes.

The Under Cover Book Club selection for April, by Jessica Shattuck, takes place mostly during the period immediately following the fall of Nazi Regime. However, the tale spans much farther. Beginning with the prologue, set in 1938, as Germany is on the cusp of full-blown war, and continuing all the way through to the last chapters, taking place in 1991, we follow the stories of three women, thrown together by war, and the unlikely family they create as a result.

At the book’s outset, Marianne stumbles upon a meeting of like-minded men, taking place behind closed doors during the annual harvest party, held at the castle estate belonging to her husbands’ family. In this meeting, the men are discussing their plans to create a resistance movement against the unthinkable policies and actions of Adolf Hitler.

Marianne’s own husband, Albrecht, as well as one of her dearest childhood friends, are included in this circle. As Marianne uncovers a knowledge of their plans, her friend, Connie, extracts from her a solemn promise: should things go badly for the resistors, she is to find a way to look after their wives and keep them safe.

He appoints her the “commander of the wives and children,” and just like that, this young woman of privilege becomes a part of the men’s world – knowing full well what they have pledged to do, as well as the cost their actions may carry.

The men, led by Albrecht, will ultimately carry out the 1944 failed assassination attempt, known as Operation Valkyrie, and will be summarily executed as a result. Shortly afterward, in 1945 when the Nazis are finally defeated, Marianne begins her journey to find the surviving widows and children of her husband’s men.

First, she finds Connie’s son, in a Nazi reeducation home. Together, they return to the town of Burg Lingenfels, and the castle estate, which is, like the whole of the country, much worse for the wear of the preceding seven years.

Next, she finds Connie’s wife, Benita, who has fallen into the hands of the Red Army. Bringing her home to the castle, she reunites Benita with her son, and the women, along with their children begin to piece back together a life, amid the ruins of war.

Soon, they are joined by another wife, Ania, and her children, and the group will spend the next few years in the refuge of the castle, coming to terms with their new world, and the past decisions that have brought them to where they are.

So many books deal with the events of WWII, and particularly the acts perpetrated by the Nazis, but not too many focus on what came next. What was the climate like in an occupied country, where you were constantly guessing as to what role your neighbors may have played in the atrocities? How did everyday Germans reconcile their own actions, or lack thereof during the preceding years? In full light of the horrific truth, could they have done more to stop it?

Through the pages of the book, we will learn the stories of these women, each of whom had a very different journey before arriving to stay at the castle.

Towards the end of the book, Marianne says, “There is so much gray between the black and white…and this is where most of us live.”

This statement was as true then, as it is now, an ocean away, in our own backyard. It is in this gray space that we find the true life of real people, and I can’t wait to delve into the gray world of these women, impeccably penned by Shattuck.