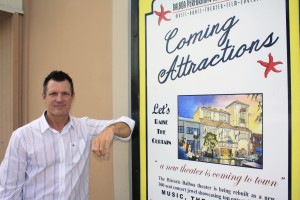 “What’s in a name? That which we call a rose by any other name would smell as sweet.”

The folks at the Balboa Performing Arts Theatre Foundation seem to agree with Shakespeare, because they’ve just announced a new name for the theatre that they hope will bring the sweet smell of success to their project.

The Balboa Village Theatre is the new moniker, and the theatre’s CEO, Steve Beazley, thinks it’s a fitting name.

Beazley also said the Urban Land Institute study on Balboa Village released September 11, 2013, spoke to the same thing–that the Balboa Theatre was critical to the revitalization of the area.

According to the Urban Land Institute study, the Balboa Village Advisory Committee was created to oversee the timely implementation of the master plan, and has started to implement some of the strategies.

The study includes a visionary Brand Promise for 2020:  “Balboa Village Fun Zone is a unique piece of the heart and soul of Newport Beach, and is an inviting, family friendly entertainment, shopping and dining district. Recognized as Newport Beach’s original town site, the revitalized neighborhood is anchored by a complementary mix of large and small scale attractions, including the dynamic new ExplorOcean interactive center, the restored Balboa Performing Arts Theater and event center, and the renovated iconic Pavilion. The expanded Fun Zone is a quaint and engaging environment that offers an array of harbor and beachfront activities for many age groups, and is a celebration of the classic Southern California beach life that is contemporary in personality yet steeped in tradition.”

“I think the study shows the city’s resolve,” said Beazley. “We’re trying to get in sync and work in consort with the city and the businesses in the village, and the residents.”

Beazley said he intends to have the theatre’s new business plan ready by the middle of October, which will help give potential new donors the information they need to provide the last of the funds necessary for the theatre’s renovation, which they hope to start later this year.

According to a statement from Todd Pennington, the foundation’s board chair, 80 percent of the funds needed for renovation of the theatre have been raised. His statement noted that the name change will demonstrate “commitment and momentum, signaling to those wishing to contribute that the time is now to get involved. The foundation needs to have funding in place by the end of October.”

A new website, BalboaVillageTheatre.org, has been created. It currently serves as a landing page where visitors can sign up for newsletter updates, but Beazley said it will be expanded into a full website in the coming weeks.