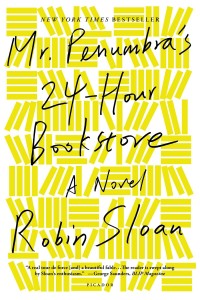 We recently returned from a whirlwind road trip, driving 2,000 plus miles in four days to visit college campuses with our oldest.

As we set out, I was armed with very little – water bottles, an app listing Starbucks locations, and several good books.

Thanks to Amazon’s new one-day free shipping option, I was able to pad my selections with a few titles that had recently caught my eye. I was hoping to get a jump on the new Under Cover Book Club selection, but alas, that was the only title not to arrive before we cast off on our collegiate quest.

And so, with no head start at all, I present to you the Under Cover Book Club pick for August: “Mr. Penumbra’s 24-Hour Bookstore,” by Robin Sloan.

Last month, we returned to our high school, impressionable-reader roots, as we revisited the Finch family with Harper Lee’s new (old) book, “Go Set a Watchman.”

For many, this was a disappointing endeavor, casting a new light on characters we had grown to love and revere, and showing perhaps a little too much of their human imperfection.

To some, who felt that this new book tainted the saintliness of Lee’s previous masterpiece, “To Kill a Mockingbird,” it solidified a belief that the past is just that for a reason. Once we had cars, no one was dying for a return of the covered wagon. Bulky pagers were happily replaced with text messages. And, there was no need for “Watchman” once we had “Mockingbird.”

This month’s book selection, however, begs to differ. In “Mr. Penumbra’s 24-Hour Bookstore,” we see the old-

fashioned world of printed books, bound together with paper and glue, as in intersects with the modern era of Google and Wikipedia, where a few keystrokes can bring the world to your laptop.

Through the adventures of Clay Jannon, and his supporting cast, Sloan shows us that both worlds have their beauty and value, and can, in fact, exist in harmony with one another.

Clay Jannon was a casualty of the recession. As a middling web-designer, he found himself out of a job when the tech bubble burst. Needing a way to earn an income, he took a job working the graveyard shift in an odd little 24-hour bookstore.

Clay notices that “customers” in the store rarely purchase anything, and instead, the more regular visitors are checking out volumes from a strange set of books. Clay has been instructed by Mr. Penumbra not to read these particular books, an admonition that, of course, stokes his interest.

Predictably, the forbidden always draws a sucker in, and Clay succumbs to his curiosity, discovering that the books are written in a type of code. Enlisting his tech-savvy, millennial friends to help him crack it, Clay is thrust into the world of a mysterious secret society, endeavoring to solve what is known as the Founder’s Puzzle.

While the cloak and dagger set is using old-world research methods, Clay and Co. harness the power of the Internet to aid their quest. Ultimately, both groups learn that success will only come if they can work together.

While the book provides the reader with a good dose of mystery and intrigue, it also is a commentary on the past, present, and future of reading. While relying on all types of modern technology, those endeavoring to solve the puzzle must first consult one of the world’s oldest technological tools – the book.

The New York Times refers to “Penumbra” as, “part love letter to books, part technological meditation, part thrilling adventure, part requiem.” It goes on to say, “Sloan balances a strong plot with philosophical questions about technology and books and the power both contain.”

For someone who loves her iPhone as much as her book collection, this sounds like a perfect read.