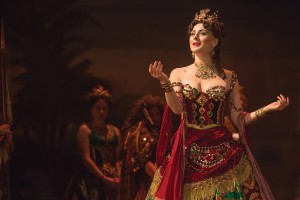 Having seen the musical “The Phantom of the Opera” more than 10 times, I suppose I qualify as a Phantom fan, although there are those Phantom aficionados who have seen the show far more than that.

The last time I saw “Phantom” was at the Pantages Theatre in Hollywood on Halloween night, 2010. It was the final performance of the final Broadway touring production, and composer Sir Andrew Lloyd Webber, Sarah Brightman (the original Christine), and other notable names were in attendance (I also managed to bluff my way into the closing night party, but that’s another story).

Turned out that was not really the “final” touring production, because a new version of “The Phantom of the Opera” is now on tour, and comes to Segerstrom Center for the Arts Aug. 5-16.

This new production offers reinvented staging and stunning scenic design, and is performed by a cast and orchestra of 52, which according to press material makes it one of the largest productions on tour in North America.

Most musical theater fans are familiar with “The Phantom of the Opera,” which tells the classic tale of The Phantom and his protégé, Christine, who falls in love with her childhood friend, Raoul.

In the show, opera singer Carlotta is the diva who, thanks to The Phantom’s scheming, is replaced by Christine.

Jacquelynne Fontaine has played Carlotta since the tour first launched in December, 2013. Prior to nabbing the role of Carlotta, Fontaine performed in numerous operas in Italy and many stateside musicals. She was also Miss California in 2006 and competed at Miss America in 2007, placing in the Top 10. She won the talent award, singing “Vissi d’arte” from Puccini’s “Tosca.”

“I spent most of my time as Miss California as a goodwill ambassador talking to kids,” recalled Fontaine during a recent interview.

Fontaine said she started her career in musicals but “felt called more towards opera,” so the role of Carlotta is a natural for her, although as an opera singer, she seldom performed on back-to-back nights like she does in “Phantom.”

She grew up listening to “The Phantom of the Opera” and saw the show when she was in high school, never thinking she’d one day be in the show.

“I got my masters at USC, completed two years of doctoral training so I could teach because I love teaching, but then I got my Equity card, which is a fast track to the professional world.”

Fontaine performed in various operas and musical and auditioned for a casting director who liked her and starting throwing gigs her way.

When they were looking for a new Carlotta for the touring production, they had shifted the character to a younger Carlotta at the top of her career.

“Originally they told the story through architypes, and it’s clear that Christine is the better performer,” said Fontaine. “The Phantom realizes she is more talented one. With this telling, everything has a much dimension as we could pull out, so the prima donna opera singer is not bad. The Phantom is in love with Christine and wants her to succeed.”

Fontaine noted that the show is a different take on “Phantom,” and that fans of the original will be pleasantly surprised by the new production.

“Audiences are loving it—they’re crying and saying it’s their favorite,” she said. “I love the three dimensional telling of it. The Phantom is not so much a hero, he’s an anti-hero. You see he is a broken man, so at the end, when he’s a ‘pitiful creature of darkness,’ it makes it resonate.”

For tickets to “The Phantom of the Opera,” visit SCFTA.org.