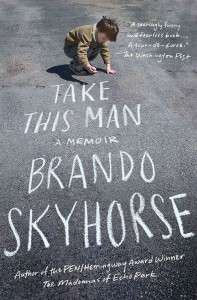 With September finally here, it is time to call to order another meeting of the Under Cover Book Club.

Schedules have been crazy, and I must admit that my reading life has been firmly shoved to the back burner. I have been spending so much time getting things crossed off the ever-present to do list, that the only reading I have had time for is the book I am reading together with my boys.

Once bedtime rolls around, forget reading a chapter or two, I am just ready for my head to hit the pillow. Thus, I have barely had time to finish last month’s selection, much less give any consideration to what I would choose for September. Luckily, I have my trusty reading wish list, and a few moments’ consultation of its titles can usually provide me with something that strikes my current fancy.

And so it is, that I present you with the Under Cover Book Club selection for September:  “Take This Man,” by Brando Skyhorse.

Described as a must read for those who enjoyed books such as Jeannette Wall’s “The Glass Castle,” in which the storytellers are able to overcome their questionable upbringings, “Take This Man” tells the tale of Skyhorse’s journey through the crazy life his mother created.

Named for iconic “Godfather” actor, Marlon Brando, Skyhorse was born to his mother, Maria, and his Mexican father, Candido García Ulloa. When his father left the family shortly after the author’s third birthday, Maria took it as her cue to reinvent the family’s history.

She struck up a correspondence with an inmate, Paul Skyhorse Johnson, who had been incarcerated for robbery. Using

this to create a paper trail with Brando’s new “father,” she changed his surname to Skyhorse and began to tell him that he was the son of an imprisoned Native American activist. Growing up with his mother and grandmother in the Echo Park area of Los Angeles, this new identity allowed him to be “more than just another Mexican” from the neighborhood.

As his mother cycled through numerous boyfriends and husbands (Skyhorse would have five stepfathers over the years, plus a sixth whom his mother never officially married), he found himself searching for a father to connect with.

Describing feeling “father rich, but family poor,” he struggled to cope with the near constant cycling of authority figures, as well as his mother’s erratic behavior and the lies he was beginning to see holes in.

In writing this memoir, Skyhorse took great pains to ensure its authenticity. In an earlier interview, he recounted sharing certain occurrences that were so visceral to him that the telling need not include any dialogue, simply a portrayal of how he was feeling.

He also shared, however, about seeking out not only his biological father’s side of the story, but also the remembrances of others of the men who Maria took up with, in order to guarantee that his story wasn’t built solely on his mother’s fabrications and his own, possibly tarnished, memories.

It is a strange thing to have had your world be so mixed up, that you feel the need to fact check your own recollections, but it appears that Skyhorse has come through the experience incredibly well adjusted.

Having kept the name his mother invented for him, Skyhorse’s first novel, “The Madonnas of Echo Park,” earned him the PEN/Hemingway Award, as well as the Sue Kaufman Award for First Fiction. He holds a degree from Stanford University, is a graduate of the MFA Writer’s Workshop Program at UCI, and currently teaches creative writing at Wesleyan University.

Now, his memoir is also garnering critical acclaim, causing Kirkus Reviews to laud it as “A wickedly compelling account of a dysfunctional childhood. By turns funny and wrenching, the narrative is an unforgettable tour de force of memory, love and imagination.”

It is, to be certain, a fascinating tale. And, one well worth penciling in some much needed reading time for.