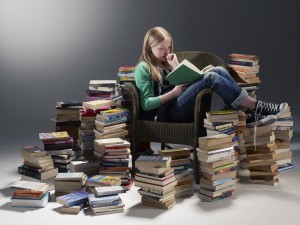 I have long espoused the notion that when it comes to reading, it doesn’t matter so much what you read, as long as you are reading something.

The potential for discovery exists in the pages of everything, from People magazine to “War and Peace.” Of course, you need to have expectations relative to your reading material, but learning is all around us, and presents itself in as many ways as we are willing to open ourselves up to.

When it comes to my kids, however, I do encourage the reading of novels, if for no other reason than the fact that I love the ability they present to be able to immerse one’s self in another world, and try out someone else’s reality.

So, although my youngest has found a new love for graphic novels, and my middle is preferring non-fiction lately, I still encourage (ok, require) them to make selections from the broad array of fantastic fiction available to them.

That being said, I am a little bit of a fiction snob. While I like titles from varying genres, there are just so many poorly written tomes out there, and while I’m not too good for much, I am too good to waste my time on so much of the formulaic fodder that keeps finding its way into the mainstream.

To me, a good book needs to make me feel something. I need to be able to make a connection with the characters on some level, whether that be an ability to relate to their truth, or a fascination at a completely foreign mindset.

I want to be able to understand what makes the story, and the people in it, tick, and when the situation calls for it, if you can keep me guessing as to that motivation, well then, even better.

Interestingly enough, science is backing up my self-proclaimed expert opinions. Ok, maybe not where People magazine is concerned, but when it comes to the reading of fiction, several studies are showing that partaking in a good dose of literary fiction can affect one’s EQ in the best of ways.

What is an EQ, you ask? We are all familiar with the IQ, or Intelligence Quotient, as a measuring tool for intellectual capacity. Similarly, the EQ, or Emotional Quotient, is a gauge of one’s capabilities where empathy and emotion are concerned. Simply, it is defined as “The ability to recognize one’s own and other people’s emotions, to discriminate between different feelings and label them appropriately, and to use emotional information to guide thinking and behavior.”

Scientists are learning that when reading literary fiction – a term used to differentiate fictional pieces in which there is a deep and rich character development – readers are growing their capacity for empathy. Basically, if the goal is to be able to walk in another man’s moccasins before judging him, it follows that the more “moccasins” you are able to try on through your reading adventures, the more types of people you will in turn be able to relate to in the real world as well.

One particular study followed children who read the “Harry Potter” series. In these books, Harry is a character who has been largely marginalized by those around him, until he finds his place among the wizards. Consequently, he developed empathy for other groups of people who struggled on the outskirts of society. During the course of the study, scientists found that the young readers who were able to make a connection with Harry, were also more accepting of marginalized groups of people, such as minorities and the LGBT community, in their real lives.

What could be more of a win-win? Through reading, we develop our vocabularies, increase our critical thinking skills, build our imaginations, AND become better, more tolerant people?

Sorry kids, looks like mom was right again, and she couldn’t be happier about it.