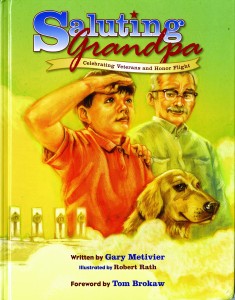 As we ready to fire up the grills for Memorial Day (with children everywhere excitedly reminding their parents that there will be no school on Monday), I began to search for a book that might be appropriate to profile this week.

I wanted something that honored our veterans, spoke to their hero status, and might cause readers to reflect, if only for a moment, about the sacrifices that inspired the holiday we are preparing to enjoy.

While there are many books that fit the bill, including must-read titles such as “Unbroken” and “American Sniper,” that have recently seen their stories translated to the big screen, it was a humble children’s book that caught my eye and tugged on my heartstrings.

“Saluting Grandpa: Celebrating Veterans and Honor Flight,” by Gary Metivier, tells the story of Andrew, a young boy who desperately wants to see his great-grandfather get the recognition he deserves as a veteran of WWII. While Grandpa is reticent to even speak about his experiences during the war, Andrew is determined to see him celebrate his bravery and love of country.

While the story is touchingly patriotic, it tells another story, larger than that of a single boy who loves his grandfather. At school, Andrew learns about the real-life Honor Flight program, which aims to get veterans to Washington D.C., in order to see first-hand the memorials built in their honor.

Honor Flight was first conceived of back in 2004, when founder and retired Air Force Captain, Earl Morse was working as a 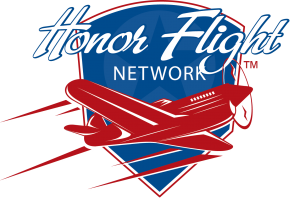 physician’s assistant at a VA clinic in Springfield, Ohio. That May, the WWII Memorial had been dedicated, and was a frequent topic of conversation amongst the many veterans he cared for.

As Morse asked his elderly patients whether they planned to visit the memorial, many replied that they would love to. However, as the months wore on, and he saw his patients during subsequent visits, it became clear than the great majority of them would never be able to make the trip. Advancing well into their eighties, most lacked both the finances and physical stamina a trip of that nature would require.

Feeling strongly that these brave souls should be able to stand in front of the memorial constructed in their honor, he realized that as a private pilot, he may be able to make that dream come true for someone. Thus, he offered to fly two of his patients to the memorial, free of charge, and serve as their personal escort. After seeing their emotional responses as they gratefully accepted his offer, he presented his idea to his flying club, where 11 more pilots offered to do the same.

The first Honor Flight took place in 2005, with six small planes flying twelve humbled veterans to Washington. The experience was one that both veterans and volunteers agree will stay with them forever, and the Honor Flight Network was born.

That first heartfelt journey has grown to the organization at work today, which uses commercial airlines in order to be able to fly larger groups of veterans in a more efficient manner. Each honored guest is given an escort to assist them in getting around, and is transported, free of charge, to a place where they are able to remember and reflect, owning their own place as heroes, and paying tribute to the others who were not so lucky. By the end of 2012, more than 98,500 veterans had been able to make the trip.

Today, the Department of Veterans Affairs estimates that approximately 640 WWII veterans are dying each day, and thus Honor Flight gives priority to requests made by the more “senior veterans” of WWII, as well as veterans of other wars who may be terminally ill.

Just as Andrew from the book hopes to see his grandfather take his place amongst the heroes of history, so Honor Flight hopes to help these men.

Please visit honorflight.org for more information, or to make a donation.