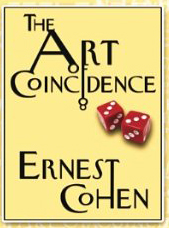 Newport Beach boasts yet another member of the august club known as “Published Authors,” in the form of it’s very own everyman, Ernest Cohen, by way of his new collection of short stories, “The Art of Coincidence.”

Reading this book is a bit like taking an enjoyable trip down the rabbit hole. A sojourn into what is undoubtedly a brilliant mind, “The Art of Coincidence” is at once edgy, humorous, and profound, with stories that run the gamut from sorting out the logistics of how a terrorist might expect to receive his allotment of virgins in the hereafter (apparently, you can cash in up front, or select the multi-year plan,) to how becoming proficient in Shakespeare can help immigrants to land a quality job (and how those Shakespearian quotations relate to a womanizing medieval court jester,) to what your dentist is really doing while he’s got you drugged up in that chair (yikes!)

Definitely not for the faint of heart, Cohen’s collection throws political correctness to the wind, and goes where many writers are not secure enough to go. With tongue in cheek commentary on politics, religion, and the human condition, it is sure to get your dander up at least once, but will have you chuckling at the same time.

In “Life With Baobar,” for example, the title character enjoys a publication entitled “Fascism:  Today!” in which one of the articles discusses, among other things, why leading by example is a faulty plan. “Remember, it’s a lot easier to tell someone else how to live a righteous life than it is trying to live a righteous life yourself. And a lot more fun too! Hallelujah!”

My favorite story however, was the one from which the book draws its title, “The Art of Coincidence.”

With such a penchant for bad luck, one would expect Zukor to be stuck in a pattern of uh-oh, oops, repeat for the rest of his sorry, sad-sack life, were it not for the existence a cosmic group known as the Guardians of the Given, a repository of vast computer knowledge comprising all that mankind ever has or will have known and accomplished.

Overseen by the Gatekeeper, the Given employs certain “gardeners,” responsible for planting seeds of thought that change our course of action, ever-so-subtly nudging us toward our true destinies. In this case, a nudge that may just be able to alter the course of our pathetic protagonist.

As an aside, for all you devout liberals, the story also offers up an interesting theory as to just how, exactly, George Bush, the younger was able to secure the presidency – your aching question finally answered!

Having had the opportunity of meeting Cohen in real life, I can attest first-hand to his obvious wit and intellect. I can also bear witness, that in addition to being gifted with a rare genius, he is also a devoted husband and father.

I have seen his tender interaction with his son, and am sure these paternal instincts influenced the softer moments in the final story in the collection, “Of Henry and Buck,” in which we are able to glimpse two fathers, who while flawed, have the utmost feelings of love and pride for their young progeny.

With a creative mind that is no doubt chock-full of enough eclectic material to fill several more volumes, I’d say Cohen is a local boy worth keeping your eye on.

To purchase “The Art of Coincidence,” please visit amazon.com.