Stepping through the entrance of Vintage Hair Salon on Coast Highway is like suddenly being transported back to a 1940s beauty parlor.

Period salon accessories are scattered throughout the small shop. Framed beauty ads from 1940s magazines cover the walls. Classic Heywood Wakefield vanities are at the stylist stations. The decades-old dryers are all shiny chrome hooded, and work perfectly.

Vintage Hair Salon owner Lisa Tickenoff may have been born in the 1980s, but her soul is stuck in another era.

Growing up, she used to hang out at her mother’s best friend’s beauty salon. “I liked the socializing, and having your hair done makes you feel good, like you can take on the world.”

Tickenoff has indeed taken on the world, starting when she was in fifth grade and declared to a school counselor that she wanted to own a vintage hair shop.

“He looked at me like I was crazy and told me I was too young, but I said just watch me,” recalls Tickenoff.,

She waited until ninth grade, and then talked to another counselor who set her up on a game plan to graduate a year early so she could enroll in beauty school at Golden West College in Huntington Beach.

“I didn’t know there was a two year waiting list, so when I tried to enroll and found out they were full, I started to cry. The next day I got a call from the school saying someone cancelled and I could start immediately.”

She received her cosmetology license and went to work in a hair salon, and then attended the advanced academy at the Paul Mitchell School in Costa Mesa. She later taught there until she was ready to open her own salon.

Knowing she wanted to be near the water, Tickenoff looked around and found a small cozy storefront in Newport Beach where she could launch her business, which she did in 2011. She immediately set about creating a vintage feel for her salon by scouring eBay and Craig’s List for classic salon items. She also brought boxes of treasures from home.

“I restored the chairs myself, and many of the things in the shop I’ve saved since I was about 10 years old. And I have clients give me things. One wo

man brought in a box of items that she was going to throw away, and I started to tear up and told her they were beautiful.”

Tickenoff’s concept has worked better than she expected. She has a slew of local customers, plus some who travel from San Diego and Los Angeles to have their hair shaped into a modern yet retro look.

So how do people find out about her special salon?

“I’m a chatty Cathy,” laughs Tickenoff. “I’d be in Starbucks and someone would comment on my hair because it was done in the 40s style, and we’d start talking.”

Her flair for self-publicity has landed Tickenoff several fashion shoots that required vintage styling. She’s been approached to do hair for movies, but shies away from that prospect.

“I’m more of a Susie Homemaker,” she admits.

She is considering opening another salon, possibly in Los Angeles, if she can find a young, ambitious hairdresser with the same passion for cutting hair and love for a bygone era.

When asked who does her long, curly red hair, Tickenoff smiles and says “I do. I’m letting it grow. The red hair gets attention.”

Based on her track record, Tickenoff will be getting attention for a long time to come.

For more information, call (949) 335-8172 or visit TheVintageHairSalon.com, where you can watch old movie clips showing various hair styles and how to wear them. 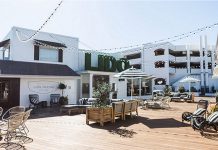