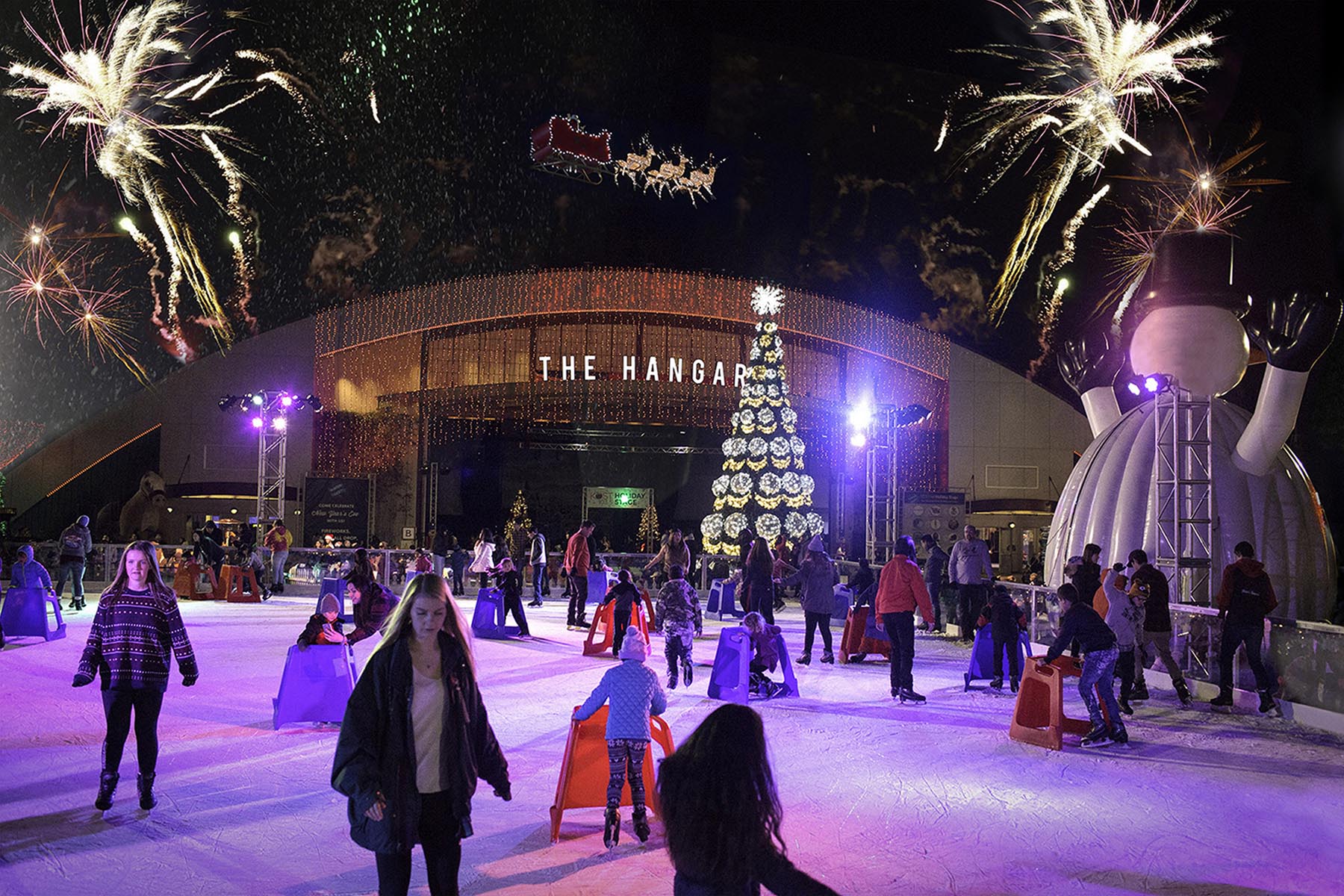 Attendees ice skate during a previous year of Winter Fest OC near the hangar building at the fairgrounds.
— Photo courtesy Winter Fest ©It’s always risky when someone decides to launch a new, independent, wintertime festival with myriad events and attractions. Will enough people actually attend to make the venture worthwhile?

Winter Fest OC took the plunge five years ago when it opened at the Orange County fairgrounds, hoping the cool concept would prove popular with families. After all, who doesn’t love wintery activities, even in normally balmy Orange County?

The concept proved to be a hit. A huge hit. Now, Winter Fest returns next week for its fifth annual cheerfully chilling time, from Dec. 19 through Jan. 5, and it’s bigger and better than ever.

Winter Fest uses much of the fairgrounds for its various activities. Most events are in the main plaza and inside adjacent buildings, although carnival games and rides are outside near the fair’s usual kiddie ride area.

This year’s Winter Fest OC features a redesigned outdoor ice-skating rink, probably the most popular activity each year, followed by ice tubing down a nine-lane, 150-foot long Snowflake Summit slide (it’s faster than it looks, especially for adults). Real snow blown in daily — although based on our recent storms, they could probably haul some snow down from our local mountains.

Returning to Winter Fest is a delightful Dicken’s Village, with Victorian-era holiday shops and entertainment. Vendors are adorned in period garb, and many of the crafts for sale are hand-made. This is a perfect spot for adults to enjoy quiet time while their kids are busy with carnival rides or sledding.

So what else can you do at Winter Fest?

Alpine Village features Festival of Lights, an illuminated pathway you can walk through to explore holiday themed lands with animated displays and more than two million lights. Trackless trains can take you through the exhibit and into the heart of Winter Fest.

Winter Fest opens most days at either noon or 2 p.m., but after dark entertainment starts nightly at 6 p.m. with popular tribute bands in the hangar building, and dancing with a live band, DJ and libations at Hussong’s Cantina.

Some of the tribute bands scheduled for Winer Fest include Queen Nation: Tribute to Queen, DSB: Tribute to Journey, Rumours: Tribute to Fleetwood Mac, and the ever-popular Flash Back Heart Attack.

In addition to being open on Christmas Day, there will be a New Year’s Eve Orange Ball Drop Celebration, which happens at 6 p.m. and again at midnight.

A Three Kings’ Day Celebration takes place on Jan. 5 with a parade, live camel, and kings cake available for purchase.

Tickets to Winter Fest start at $10, and include most activities and attractions. There are separate fees for the ice skating, candy cane carnival with more than 30 rides, attractions and games, and photos with Santa and Mrs. Claus (Dec. 19–24 only). VIP experiences are also available.