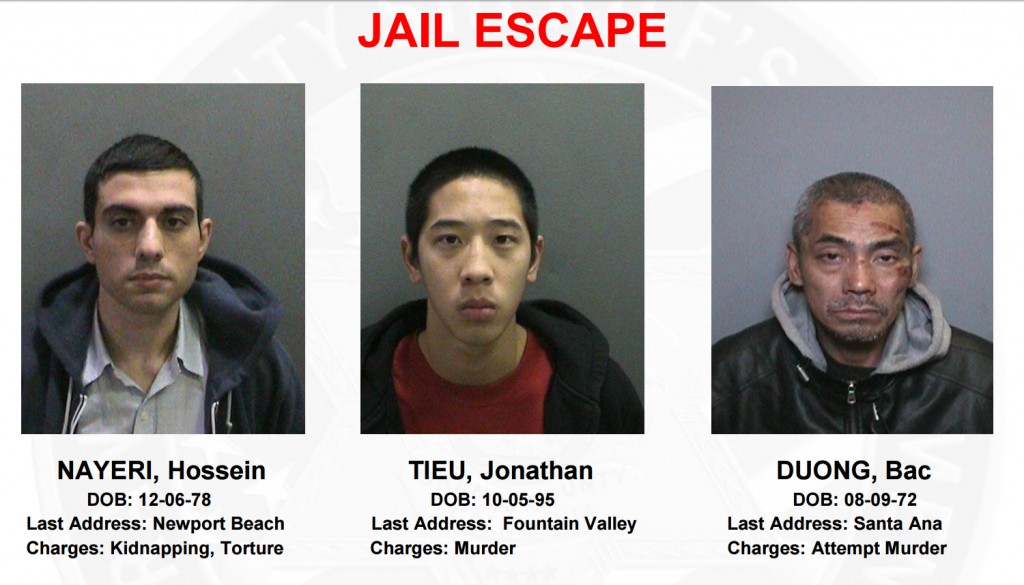 Orange County authorities are still searching for the three men that escaped from the Central Men’s Jail in Santa Ana last week, including Hossein Nayeri of Newport Beach.

The three men apparently cut through steel bars and crawled through plumbing tunnels to escaped.

They are to be considered dangerous and possibly armed. Authorities still believe they are in the Southern California area. 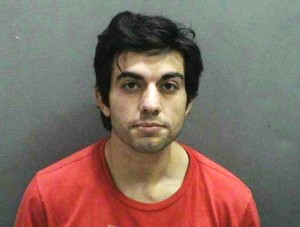 Authorities are offering a reward of $200,000 for information leading to the capture of fugitives.

Nayeri is accused of attacking the owner of a local marijuana dispensary business. He is charged with two felony counts of kidnapping for ransom and one felony count each of aggravated mayhem, torture, and first degree residential burglary, with a sentencing enhancement for inflicting great bodily injury. If convicted, he faces a maximum sentence of life in state prison without the possibility of parole. Prior to the escape, Nayeri was scheduled for pre-trial on Feb. 2.

Sewer rates for Newport Beach residents are going up, following a decision by City Council this week.

They also approved a one-time rebate of about $55 to $60 per home, as proposed by Mayor Diane Dixon.

The rebate vote was 5-2, with councilmen Keith Curry and Ed Selich dissenting.

Bills are split up between the variable use charge and the fixed service charge.

The total cost varies depending on the user, but about 94 percent of customers have one of the smaller meter sizes and the average monthly water use for a single family home is 15 HCF.

So the average customer currently pays approximately $9.75 total for sewer service and use.

The congregation of St. James the Great Episcopal Church this week is calling on Bishop Jon Bruno of the Los Angeles Diocese to release the annual audit of his sole corporation, as he promised at the Diocesan Convention last Dec. 5

“After nearly two months, the Diocesan community is still waiting for the Bishop to act on his promise to the convention,” said Sue Rawlings of the congregation’s transition committee. “To be honest, this is reaching a point where some might question the Bishop’s good faith. It could very well dissipate whatever good will delegates may have felt toward the Bishop right after the convention.”

The bishop’s promise to release the annual audit came as the convention was considering a measure to require a public third-­‐party audit of the corporation, called the “Corp Sole,” which has the bishop as its sole officer.

Corp Sole holds upwards of 60 real properties plus other assets. An annual audit of Corp Sole is required by state law, but that audit goes to the bishop as sole officer and has never been shared with the governing bodies of the Diocese or the public.

As a result of the bishop’s promise to release his audit to anyone who wants to see it, backers of the independent audit in good faith withdrew their proposed resolution. Both moves drew appreciative applause from the nearly 600 delegates.

Since the convention, members of St. James the Great have requested a copy of the audit on several occasions, but have yet to receive either the audit or a date when they can expect to get it.

Last May without advance notice or discussion, Bishop Bruno told the St. James congregation he had signed an agreement to sell the church building and property to developers Legacy Partners for $15 million, who intend to tear down the church and build luxury townhouses.

The Griffith Company, the original owners of the land, donated the four lots upon which St. James the Great was built. The deed for the property included a use restriction that the property would always be a church. That deed and legal actions have delayed the sale.

A “slander of title” lawsuit filed by the bishop against the Griffith Company is still tied up in court. The congregation, which has been locked out of the church, has been holding services in a park near the church, and at a business on 17th street in Costa Mesa.

AgnewBrusavich, a Torrance-based serious personal injury law firm, obtained a settlement against the city of Newport Beach and the California Department of Transportation (Caltrans) for a bicycle-vehicle accident that resulted in the death of 58-year-old Debra Deem at the intersection of Coast Highway and Newport Coast Drive in August 2013.

The driver who fatally struck Deem was criminally prosecuted as the cause of the accident, but Caltrans agreed to a settlement of $450,000 and the city of Newport Beach agreed to pay an additional $225,000, with both government entities agreeing to work with experts to implement improvements to the intersection.