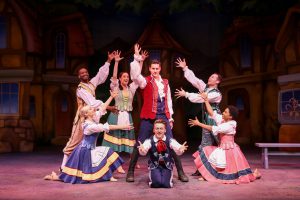 South Coast Rep has its “Christmas Carol” and Segerstrom Center has its “Nutcracker,” but Laguna Playhouse has established a holiday tradition of its own with its annual presentation of an elaborate “panto” courtesy of Lythgoe Family Panto.

Panto, short for Pantomime, is a musical comedy stage production developed in England and mostly performed during the Christmas season. These interactive productions involve audience participation and broad humor, both of which are in abundance during the Laguna Playhouse staging of “Beauty and the Beast: A Christmas Rose,” which runs through December 30. 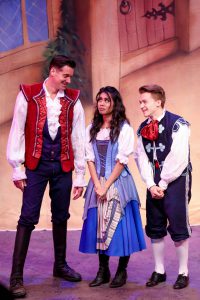 Written by Kris Lythgoe and directed by Sheldon Epps, “Beauty and the Beast: A Christmas Rose” stars Ashley Argota, Thomas Hobson, Heath Calvert, Riley Costello, Andrew Barnicle, Roland Rusinek, and David Engel. The show is a modern version of the classic fairytale where the audience is encouraged to cheer, boo and sing along with popular songs such as the Bee Gees’ “Staying Alive,” The Chainsmokers & Coldplay’s “Something Just Like This,” and Edith Piaf’s “La Vie En Rose.”

Yes, those songs and several others are inserted as plot developments, and are delivered with aplomb by a stellar cast that seems to relish the interactive aspect of the show while keeping their characters grounded in reality—as much reality as possible when the show is played broadly to suit an audience that ranges from small children to older adults. 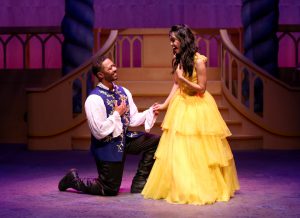 This fast-paced musical comedy is pure delight from beginning to end. Jokes fly fast and furious, some geared to the younger set, while others fly over their heads and land squarely on adults.

In this version of “Beauty and the Beast,” the characters reside in the kingdom of Laguna, a setting that lends itself to countless topical jokes about traffic, parking and other familiar fodder.

The costumes in the show are period-perfect while allowing for some silly variances, such as Dame Derrier’s creative dress that looks like it was fashioned out of a small library. 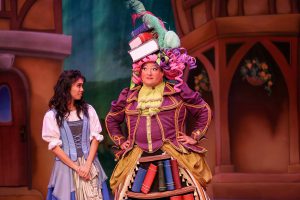 Immediately apparent is the expert choreography, and the skill of the dancers, right down to the youngest who looks to be about 10 years old. Of course, it helps that the choreography was created by Mandy Moore, an Emmy Award winner in 2017 and 2018 known for her ground-breaking work as a producer and choreographer on the television hit show “So You Think You Can Dance.” Her choreography was also seen in the acclaimed film “La La Land.”

The opening night audience was thoroughly entertained, rewarding the hard-working cast with a standing ovation.

Looking for a good pre-theater dining spot (or post-show if you’re attending a matinee)?

I had dinner at the new Ocean at Main restaurant in downtown Laguna Beach shortly after it opened in October, and recently dined there with several fellow Firebrand Media editors. Former Studio at the Montage chef Craig Strong left that position earlier this year to open Ocean at Main.

I’ve tried several starters and entrees, including the turkey Bolognese sausage pizza ($18) with broccoli florets and bocconcini, lobster fettuccini ($24) with truffle butter, oxtail kale risotto ($18) with parmigiano-reggiano and garlic blossoms, and several others.

For me, the risotto was a clear winner. The risotto is a deep green color due to the kale, but the flavors are combined perfectly, and the texture is suitable thick and rich. The lobster fettuccini is another dish that demands attention. As with the risotto, the dish looks pretty on the plate, it’s packed with lobster, and has a rich taste that made me wanting more.

The restaurant’s décor is also pretty, with a charming patio. I’ve heard that the restaurant has been a hit since day one, which is not surprising given Chef Strong’s devoted following.

For more information on Ocean at Main, visit OceanAtMain.com.

For tickets to The Laguna Playhouse, visit LagunaPlayhouse.com.