How can you make a musical about the thousands of passengers who were stranded in Newfoundland for four days when all air traffic in the United States was grounded after 9/11?

It’s an unlikely concept, but the Broadway musical “Come From Away” that plays at Segerstrom Center through February 17 manages to tell a riveting story ripped from our collective consciousness with characters we care about and music that moves the story forward while providing moving moments packed with emotions that run the gamut from elation and whimsey to poignancy and pathos. 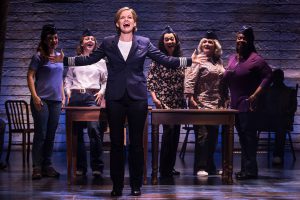 the program notes state: “On September 11, 2001, the world stopped. On September 12, their stories moved us all. ‘Come From Away’ tells the remarkable true story of 7,000 stranded passengers and the small town in Newfoundland that welcomed them. Cultures clashed, and nerves ran high, but uneasiness turned into trust, music soared into the night, and gratitude grew into enduring friendships.”

“Come From Away” had its world premiere engagements at La Jolla Playhouse and Seattle Repertory Theatre in 2015, and opened on Broadway in March of 2017, where it has been playing to standing room only audiences.

And that is where the true joy of “Come From Away” lies—in the stories of ordinary people experiencing an extraordinary moment in time, and how they survive emotionally, spiritually and physically. 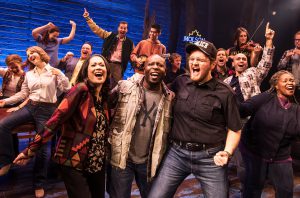 The cast is a cohesive ensemble of 12 actors who portray multiple characters. Their voices are terrific, the characterizations clever, the music (performed by a superb eight-piece band on stage) both advances the plot and highlights emotions. The simple set and staging feels perfect for the presentational style of the show.

“Come From Away” is an hour and 45 minutes with no intermission, but it’s in constant motion and enthralling from start to finish. The opening night audience rewarded the cast with an instant and well-deserved standing ovation.

For tickets to “Come From Away,” visit SCFTA.org.