Part one of a two-part roundup of the top stories that made headlines in the Newport Beach Independent in 2012. Compiled by Sara Hall.

About 10 Corona del Mar High School sophomores purchased test answers for a history exam through amazon.com. The school’s principal and parents discussed the incident at a PTA meeting.

A minivan was pushed off the ferry and into Newport Harbor Jan. 13. The accelerator apparently got stuck on the car behind the minivan and pushed it off the edge and into the water. A family of four from Taiwan were inside when it plunged into the bay and all escaped uninjured.

Newport-Mesa schools Superintendent Jeffrey Hubbard, 54, was convicted of two felony counts in a Los Angeles court for giving a $20,000 bonus to a female employee at another school district, and raising her car allowance from $150 a month to $500, both without board approval. He was fired by the NMUSD trustees the next day.

U.S. Marshals and police from Newport Beach and Irvine arrested 36 year-old Geoffrey Earl Patten around 6:15 p.m. on Feb. 1, after a standoff of more than two hours at a residence in the 100 block of 25th Street, at Balboa Boulevard. Patten was traced to the area by U.S. Marshals, who were looking to enforce an arrest warrant for 3rd degree felony larceny from New York state.

After weeks of neighborhood flap following a noise complaint in December, the Newport Beach City Council decided to keep the ordinance that governs the keeping of chickens and that the Goldenrod 6 hens would have to find a new home. The hens eventually relocated to the Newport Beach Vineyards and Winery. 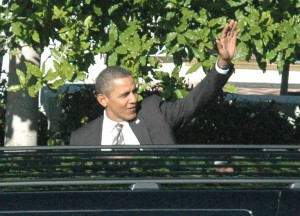 President Barack Obama, accompanied by tight security and drawing supporters and protesters into the streets, visited Newport Beach on Feb. 16 for a fundraising brunch at the home of Jeff and Nancy Stack on Evening Canyon Road in Corona del Mar. The event was attended by about 160 donors who paid $2,500 to $38,500 apiece, and it raised some $1.2 million for Obama’s reelection effort.

The internet world was abuzz after a photo was posted showing a receipt from True Food in Newport Beach with a $1.33 tip on a $133.54 bill and the words “get a real job” written on it. The photo and story went viral after a blogger posted it on his site, Future Ex-Banker, saying his banker boss left it as a message of his 1 percent status after being unhappy with the service by a waitress in the 99 percent. The photo was proven to be a fake, with the restaurant, True Food, saying the photo was greatly “altered and exaggerated.”

Mariner’s Mile Marine Center was sold to a local private investor for $25 million. The real estate firm said the investor bought the center because of its cash flow and location. No planned changes were reported. The investor’s name was not released.

City council voted unanimously to remove about 60 fire rings from beaches in Corona del Mar and near the Balboa Pier. The removal must also be approved by the California Coastal Commission, which has since repeatedly asked for more data, claiming the application is incomplete.

Richard Luehrs, president of the financially strapped Newport Beach Chamber of Commerce, told the Orange County Register that whoever leaked news of a $100,000 interest-free loan offered to the Chamber “should be shot in the head.” The Register also reported that the Chamber has given its building over to its land lessor in exchange for a 16-month lease and that Visit Newport Beach has offered the Chamber $100,000 for rights to the annual Christmas Boat Parade.

Four boaters were killed April 28 near the Coronado Islands during the 124-mile Newport-to-Ensenada Yacht Race. It initially appeared to be a collision with a larger ship, but there is also speculation based on the boat’s GPS tracking that the 37-foot Aegean may have run aground and broken up against North Coronado Island.

The city and shipwright Dennis Holland settled a long-running dispute on April 27 over the historic 1916 wooden ship, Shawnee, that Holland has been restoring in his yard since 2006. A judge approved the agreement that allows Holland to keep the ship on his property as long as he moves it out of public view and follows the city’s construction ordinances.

Irvine investors Eagle Four Partners and Pacific Hospitality Group LLC, bought International Bay Clubs, the parent company of Balboa Bay Club and the Newport Beach Country Club, on May 1. Longtime Newport Beach resident Richard H. Pickup, and his family are the chief investors. The terms of the sale were not disclosed.

Newport Beach should end the current budget year with a $4.4 million surplus, the city’s staff reported at the city council meeting on May 8. Plans for next year include eliminating eight positions, which would keep pension costs at about $25 million before increasing by another $5 million in 2014, the staff reported.

The California Coastal Commission ordered homeowners on the Balboa Peninsula to remove certain pieces of personal property and landscaping because they are extending beyond the homeowners’ property lines and onto public sand. The order reignited the battle between the government and California beachfront homeowners over access to the coveted coastline.

The Newport Beach City Council decided to go ahead with a study of the viability of a hotel in the “old” City Hall location. The council discussed other possible uses for the location, including an apartment or condominium complex, commercial and civic buildings, a hotel, a public plaza, a fire station, and public parking.

Newport Beach billed President Obama’s reelection campaign $35,000 for the cost of providing police services for the president’s visit to Corona del Mar for a fundraising event in February.

Republican presidential candidate Mitt Romney was in Newport Beach June 1 for a fundraising event at the Balboa Bay Club. Supporters paid $1,000 to $25,000 to attend. About 40 protesters gathered outside the club. The city later sent a $10,441 bill to the Romney campaign.

The Marina Park project was unanimously approved by the California Coastal Commission on June 13, but, in another vote, commissioners rejected the 71-foot ornamental lighthouse centerpiece, reducing it to 35 feet, in accordance with city land use limits. Commission members said the tower was excessive and out of character for the community. The new bayfront park and marina will include a 23,832-square-foot multi-purpose community and sailing program building, a 5,500-square-foot Girl Scout building, and a 23-slip marina with a 200-foot side tie area.

A pack of three adult pit bull dogs were shot and killed by Newport Beach police near Newport Coast Drive and East Coast Highway early June 8 after they attacked and bit a mother and her son at a nearby hotel. The responding officer was forced to retreat into his vehicle, which the dogs then attacked as well. They displayed aggressive behavior toward additional responding officers and were shot in the interest of public safety, according to a police statement. The dogs had no tags and were not microchipped.