“Life is what happens when you’re busy making other plans.”

That quote from a song by John Lennon was never more prophetic than when you think about our current day-to-day situation due to the current COVID-19 Pandemic.

Kids in school, going to work, new projects—all cancelled, while we listen and watch the news and hope for life to return to normal.

And travel? Forget about it. We all know that the New Normal will be much different than the Old, but still we wait in anticipation as we carry on with our lives again.

Like most of you, my plans have been changed, but mine were global in scale.

Since leaving my comfortable apartment in Newport Beach on February 19, 2019, I have traveled to 23 countries, almost 400 cities, and lived in many places for six weeks at a time.

Since I was self-employed as a writer and consultant, I was geographically able to live anywhere in the world, and that is what we did. My girlfriend, Kathleen, and I sold all our possessions: cars, furniture, clothing, anything that had value. Whatever didn’t, we gave away.

Unencumbered we left for Valencia, Spain, with the intention of staying there for 45 days, then moving on to Tivoli, Italy for the same amount of time. Those timelines were not random as the European Union (EU) visa restrictions only allowed for a 90 day stay.

Croatia was next for 60 days, followed by a whirlwind six-week tour through several countries via rail and bus. After 90 days outside the EU, we were able to return, so we popped in and out of European countries until October of last year.

By then our EU clock had reset so we returned to Italy, specifically the island of Sicily, for another 45 days, then on to Tunisia, then the island of Naxos in Greece, then back to Athens for our next leg—the Far East.

On New Year’s Day 2020 we landed in Singapore and until March 8 bounced between various locations in Thailand (using Bangkok as a base), Cambodia, and Vietnam. A wedding in Ohio the third week of March brought us back to our homeland, starting with Orange County and our very much missed, Newport Beach.

Making it home was not easy. The Coronavirus began to literally chase us as we flew to several different cities in Thailand, and barely made it into (and out of) Cambodia and Vietnam. We had many nervous moments as face masks started popping up more and more and flights were cancelled. 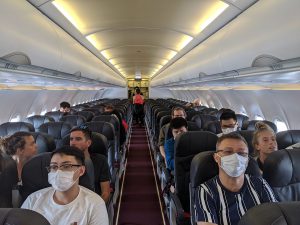 Our first leg home from Thailand to Singapore at the beginning of March was the first, and luckily the only, flight that got cancelled from under us. We were lucky enough to catch the only other flight out that same day, the first of three to bring us home.

We flew from Singapore to Taiwan and then had an eight-hour layover before catching one of the only flights out of Taipei to Los Angeles. Even then, we were scared.

Would we be subject to quarantine? Would we be pulled aside due to our journeys in the Hot Zones?

None of those fears materialized as we whisked through LAX with nary a second look and breathed a sigh of relief.

Back on Familiar Ground

After 11 days here in Newport Beach staying with friends, we were off to Ohio for the wedding that brought us stateside for the first time in 14 months. That did not go as planned (a story for another time), which was no surprise, but our plans to return to Europe in May were now off the table as border after border closed due to the pandemic.

Not to worry as there were more options, which got fewer and fewer as the virus spread more prolifically in the U.S.

My business trip to Tampa, Florida was cancelled. Our plan to go to Mexico in the time interval between Ohio and our return to Europe remained intact, until the news that had me in a panic for several days: Mexico is now closed, although we were not clear what that meant. Were the physical land borders from California through to Texas, and all the land crossings, all shut down? But what about airports? Were we still able to fly into Cancun on April 7?

I research the situation and realized that waiting until our scheduled April flight date, almost 20 days away, was too risky. Americans were told to stay home, but we had no home.

Staying in Ohio with Kathleen’s relatives including three children plus pets was not a good option, so we cut short our Ohio visit to about 72 very rushed hours and moved our flight to Cancun up from April 8 to March 21.

But the question remained: Will we be able to depart Ohio and land in a country that was now officially “closed?” Is it possible we would be able to land in Cancun and not be able to remain?

What few hairs I have left got grayer that third week in March. 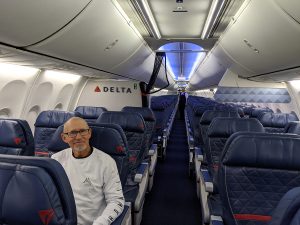 We got to our departure airport in Columbus, Ohio, and went to the Delta airlines counter. So far, so good as she told us we would be on a flight with 17 others, which is a surreal thought which only got more so.

We breezed through TSA, no line, and found smiling faces from agents who were happy to have employment after many layoffs in the travel sector by that time.

Our departure gate for our 0730 flight was a ghost town, but I felt that we’d be able to board and carry on with our plan. Then the gate agent came over and told us something no airline had ever said to me before.

“You two will be the only passengers, so you’ll have the plane to yourselves.”

Our stress and fear turned into elation as we quickly went down the jetway onto our own private 737 and sat were we wanted, which was First Class, of course. We were introduced to the flight crew and our own concierge, Benjamin, who offered us champagne and breakfast with linen napkins.

I’ve flown First Class before but this was unique. It was the first time I wanted a flight to last longer!

We arrived in Cancun with no problems other than addressing our temperature and state of health, which was all in check.

Our two-week stay in Puerto Morelos, about 30 minutes south of Cancun, is now more than eight weeks and counting. Our traipsing around the globe is curtailed for now as we have nowhere to traipse to. Our closest neighbor, Belize, is closed and unless we returned to the United States, we have zero options.

But as I look around our two-bedroom apartment in a gated community, enjoying the tropical forests all around—with monkeys!—and plenty of inexpensive food, drink and alcohol, I count my blessings.

The rent is a fraction of what I paid in Newport Beach and our monthly budget for food is, too. Nowhere to fly (for now), so time is spent writing, reading, riding my bike, working out in my second bedroom which is mostly empty, and watching way too much Netflix.

I have been inspired to write fiction for the first time, so it looks like the Creativity butterfly landed on me. The town is thankfully devoid of COVID-19, and except for mandatory mask usage in grocery stores, it is usually not enforced and viewed with a blind eye.

The beach, which has been closed for about three weeks, opened at the end of May, and it is the most inviting and warmest water of anywhere we stayed during our 14  month journey. The most turquoise shade of blue and just calling me to jump in and explore.

Since we had no home, this may be our home for the long term. We can venture out from here to Central and South America (I’ve never been) and even back to Newport Beach, since it is only a four-hour flight away, instead of 12 hours from Europe.

Europe still beckons and a return to Croatia, Greece and Romania are all but assured. But for now we stay safe, stay healthy and realize that sometimes Plans B, and even Plans C and D, may be better than the intended Plan A.

This too shall pass. I wish you all good health and safety!

Norm has been writing for the NB Indy since May 2013. Follow his travel exploits on his website TravelYounger.com, or join him at his group Facebook page.