The lyrics to the 1971 song “Signs” didn’t specifically refer to political signs, but it’s certainly a timely tune with the election less than three weeks away.

Driving around Newport Beach, it’s impossible not to notice political candidate signs, particularly those of our many City Council candidates.

They seem to appear out of nowhere, multiply faster than rabbits, and then disappear soon after votes are counted.

There is actually a rhyme and reason for political signs—and numerous ordinances governing the placement of those signs.

When a candidate files to run for Newport Beach City Council, city clerk Leilani Brown said she gives each candidate a list of city and state restrictions on the display of temporary political signs. 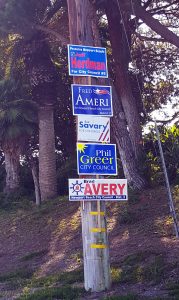 to drivers while protecting residents’ rights to free speech, the City of Newport Beach has an extensive Sign Ordinance regulating the display of signs within the city.”

According to State of California Department of Transportation, signs can be displayed no sooner than 90 days prior to a scheduled election, and must be removed within 10 days after that election.

So where can signs be placed? On private property with the permission of the property owner. Residential private property can display up to three temporary noncommercial signs without requiring a permit. The signs cannot total more than six square feet in area, and cannot be higher than four feet above the ground.

Private nonresidential property has additional restrictions, including the time limit they can be displayed, and the fact that a political sign will take the place of other signage that might be used for commercial purposes during the course of a year.

According to the city clerk’s paperwork, “the prohibition is in place to protect the safety of persons posting and removing signs, to reduce damage to city property and landscaping, prevent excessive visual clutter in the public right of way, and to reduce distractions to drivers.” 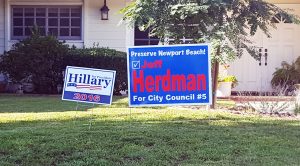 Signs that are removed from public property by city staff are discarded, and candidates who continue to violate the municipal code may be subject to a Notice of Violation.

Despite those restrictions, political signs proliferate throughout the city in front of homes and businesses, and along city streets. But whether placed legally or illegally, do political signs actually do a candidate any good?

“I went to campaign school in college taught by Karl Rove. Contrary to conventional wisdom, signs are not a persuasive media. They are designed to raise name ID so that your campaign mail is read,” said Councilman Keith Curry, who has run a number of campaigns during the course of his political career.

Curry quipped that “the two most effective places for campaign signs are on the candidate’s street to make him feel good, and his opponent’s street to drive him crazy.”

“My wife and I worked on the design with our campaign consultant, we approved it and then we hired a company to put up the signs in compliance with city regulations.”

Greer acknowledged that Newport did have its share of signs, but “nothing like what is going on in Costa Mesa or Santa Ana.”

Greer said he had around 500 signs made. “Maybe two hundred have been posted by the sign company, the majority have been taken by supporters and are in front yards throughout the city,” he said.

“When the signs are first delivered and they fill up your garage, you can’t believe they can all be deployed,” said Curry. “Eventually, you get them placed.”

David Ellis, president of Delta Partners who is managing the campaigns of Brad Avery, Lee Lowrey, and Will O’Neill, noted that “in general, signs don’t move the needle in campaigns. No one ever won a race because they had more signs than their opponent. Voters are smarter than that. Signs are important because they help galvanize supporters. A yard sign is an important indicator of a candidate’s credibility.”

As to the issue of signs placed on public property, Greer suggested that nobody is intentionally trying to circumvent regulations.

“I think that it is a matter of interpretation, given that I have signs where the opposition does not and they have signs where we do not,” stated Greer. “The more important issue is how many residents have signs in their yards. This is, in my opinion, a much more realistic matrix of community support. And by the way, I have been told that my signs are the most artistic and visually pleasing.”

“Sign regulations are for the most part honored in the breech,” agreed Curry. “Fortunately, in our city, signs seldom go up before Labor Day.”

“Regarding signs in the public right of way, it’s a time honored tradition in all cities,” said Ellis. “Cities pass ordinances that are usually unenforceable, candidates accuse their opponent of violating it, a nasty press release goes out, nothing happens, repeat the cycle.”

Ellis noted that signs can also be what he dubbed “a mine field.”

It is illegal to remove or deface political signs, yet there have been several infamous cases where candidates have been caught doing just that to their opponent’s signs.

“Bob Zellerback was the former Riverside Co. DA. Two years ago he was caught on video defacing his opponent’s sign in a remote part of the Coachella Valley. The video went viral, and Zellerback – an incumbent – lost,” related Ellis. “Or there’s the case of Adam Nick in Lake Forest. Two years ago he was caught by the OC Sheriff stealing Scott Voigt’s signs. He was charged and settled out of court by paying a fine. In the process he said the prosecutor had “raped him” with the charges. You can’t make this stuff up – signs get the blood boiling.”