On Saturday, March 23, nearly 350 people gathered at the Marriott Irvine Spectrum hotel to dine, dance, and donate funds to support the work of Alzheimer’s Orange Count.

The gala was themed “100% Local” and produced by Elite OC Productions. It celebrated the organization’s history in the community and highlighted the fact that 100 percent of the funds raised stay local.

Once the ballroom doors opened, guests proceeded into a rustic farm-chic setting, complete with ranunculus and roses, and towering orange trees as centerpieces.

A group of young performers from the South County Performing Arts Center entertained the crowd with song and dance numbers as guests dined on a delicious three-course dinner.

During the program, Alzheimer’s OC honored five individuals and/or institutions who have demonstrated ardent support and commitment to the organization throughout the years.

The Philanthropy Partner Honoree was Judy Binder of Newport Beach. In a video, Binder talked about her mother, who was diagnosed with Alzheimer’s when she was 84. It was a life-changing event for Binder, who discovered Alzheimer’s OC and began helping them in 2013. Binder is passionate about advocating for Alzheimer’s OC and educating others on the services available that helped her during her caregiving journey. Her family’s generous contributions help drive the organization’s education program. 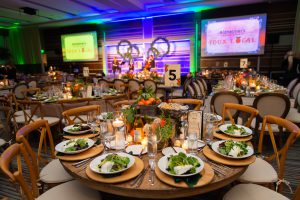