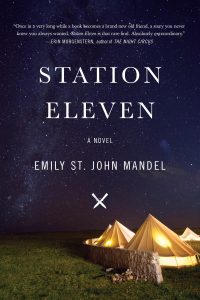 As a society, we have become so entirely reliant upon our technology that to imagine our daily existence without its myriad assistances becomes almost mind-numbing.

How do we get from point A to point B, if not by plane, train, or automobile? How do we check in with mom two states over, if not by cell phone or computer? How do we pay for our goods if not with a micro-chipped piece of plastic? And, how do we retain our “humanity” in the absence of all of this?

Acclaimed author Emily St. John Mandel examines these, and other pressing questions, in the pages of her best-selling book, “Station Eleven.”

The novel alternates between two points in time: the years before a flu pandemic wipes out the majority of the population, and a time 20 years after society’s collapse. It centers around a troupe of traveling actors and musicians, who, much like minstrels of old, travel from encampment to encampment, bringing a bit of light to the weary residents through theater and music.

When asked why she chose to set her story in a post-apocalyptic climate, rather than follow her initial plan, which had the troupe traveling through contemporary Canada, Mandel said:

“I added in the end of the world because I wanted to write a love letter to this extraordinary world in which we live.

There are a great many things about this world that are appalling, but we’re surrounded by a level of technology and infrastructure that at any other point in human history would have been considered absolutely miraculous. We live and work in rooms lit up by electricity, we cross continents and oceans in hours instead of days or months, our trash is taken away when we leave it at the curb, speaking to someone on the far side of the world is as simple as entering a sequence of numbers into a handheld device. These are remarkable things that we too easily take for granted. One way to write about the modern world was to consider its absence.”

Mandel also chose to set the post-collapse portions of the story 20 years hence, so she could skip over much of the mayhem and marauding that would surely follow such an event (and that often fill the pages of other dystopian works) to instead focus on how we, as a people, would cease being satisfied with simply surviving, yearning for ways in which we could live again.

Resonating with many, this tale of overcoming and finding the best in ourselves, despite staggering loss, has earned Mandel a plethora of awards, including placing her on the list of finalists for both the 2015 National Book Award and the 2015 PEN/Faulkner Award.

Now, Mandel will join the ranks of Newport Beach’s A-list visitors, as she prepares to speak at the library next month.

As the next presenter in the NBPL Foundation’s popular “Library Live” series, Mandel will appear to discuss her novel on Wednesday, Nov. 9. The event will take place at the Central Library, with doors opening at 6:30 p.m.

The evening will include light refreshments, a discussion and Q&A, as well as book sales and signing. Tickets to attend are $30 for the general public, $25 for foundation members, or $20 for students and teachers. To purchase tickets, please visit nbplfoundation.org.

If for no other reason than to remind us how incredibly fortunate we are, both Mandel’s book and lecture are not to be missed. As Matt Thompson, of NPR, said in his review, “Mandel delivers a beautifully observed walk through her book’s 21st Century World…I kept putting the book down, looking around me, and thinking, ‘Everything is a miracle.’”