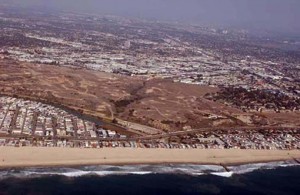 The long awaited Oct. 7 showdown with the California Coastal Commission on the controversial Banning Ranch development was a lengthy verbal shootout with commissioners and the public voicing their opinions.

After the smoke cleared, commissioners unanimously voted to postpone their decision and hear the project again in 90 days.

The extension will be up and the project likely re-heard at the Coastal Commission’s first meeting of the New Year, Jan. 13-15 in San Diego.

Coastal Commission staff had recommended that the commission deny Newport Banning Ranch’s application for a coastal permit to construct the 401-acre housing and mixed-use project.

The main reason behind the commission’s uncertainty and ultimate action for extension are the Environmentally Sensitive Habitat Areas.

The area has an incredibly unique array of sensitive coastal species and habitats, CCC staff noted in their report. The 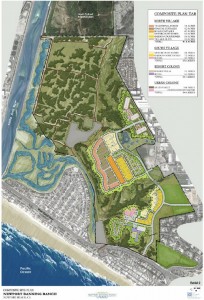 project would have significant adverse impacts, they wrote.

Commission Vice Chairwoman Dayna Bochco said that the Coastal Act is generally “flexible and broad,” and usually “invites interpretation in most areas.” However, in the area of ESHA, there are very strict parameters, Bochco explained.

“We are not to use ESHA, except for resource-dependent uses,” she said. “And we all know, we’ve all spent many, many hours conversing about it, that residential is not that.”

So, in order to build a residential project near ESHA, a developer can’t simply do mitigation on the side or move ESHA, neither are legally allowed, Bochco said.

“This project faces a lot of those hurdles,” Bochco said. “I’m trying to find ways we could accommodate a project for you (NBR) and still go within those confines.”

There are a lot of constraints with ESHA, agreed Commissioner Mary Shallenberger. The wetlands are the “show stopper.”

It comes down to the fact that they cannot develop on ESHA. Although, the site does have the potential to still allow a project to happen while honoring the mandate of protecting ESHA, she continued.

“I do believe there’s a project here,” Shallenberger said. “(But) it’s not this big and it’s certainly not this one in this location.”

Several of the commissioners agreed and acknowledged that there is potential for a project in the area, but maybe not exactly what was proposed.

“There has to be a project that is less invasive because you (NBR) chose a place that is very, very sensitive,” Bochco said.

Most agreed that a lot of work still needed to be done. They urged NBR officials to listen carefully to the commission, staff and public comments that were made.

Bochco also questioned whether or not NBR’s remediation plan was the best method, whether the area would go back to nature if nothing was done, and commented on the disconnect between CCC staff and the applicant.

Commission staff admitted there are benefits to the proposed Banning Ranch project, but they are “entwined with substantial impacts to highly sensitive resources and permanent loss of a very rare and valuable ecosystem that cannot be replicated.”

“These benefits could be incorporated into a less intense development plan that recognizes the resource value of the property,” the report concludes.

The report’s conclusions appear to be predetermined, Mohler noted. It seems that  staffers contributed to the report simply to justify that predetermination, he explained.

The report omits key information NBR provided, fails to recognize the affordable housing benefits from the plan, and is inconsistent with previous staff observations, he said.

Mohler referred to the site tour the commissioners took in 2014. They saw the oil fields, contaminated areas and areas that need to be cleaned up and replanted.

“Trust your own eyes,” Mohler said, “rather than either what I’m saying or what came out in the staff report.”

The staff report also ignores the obvious benefits of NBR cleaning up the oil field, Mohler argued. The applicant believes their remediation plan is the most appropriate method and environmentally friendly method to retire the oil fields.

In a letter to CCC, replying to staff’s denial recommendation, NBR states that their remediation process is the only feasible approach to cleaning up site contamination and is the least environmentally damaging.

“It’s not a benefit if it’s something you have to do anyway,” he said.

Although they are unsure of when the oil field will be abandoned, its “glory days” have come and gone, Welsh said. It could operate at a low level for a number of years, but when it is abandoned, it will have to be cleaned up anyway, he explained.

The Division of Oil, Gas and Geothermal Resources calls for an abandoned oil well site to be “returned to as near a natural state as practicable.” The applicant’s oil field cleanup plan, however, does not return Banning Ranch to a natural state, Welsh said. The NBR plan is designed to prepare the site for a large development project, he added.

“It dwarfs anything ever built along the Orange County coast in recent memory,” he noted.

The project is also inconsistent with several portions of the Coastal Act and the application is incomplete, noted Banning Ranch Conservancy Executive Director Steve Ray.

“This is a bad deal for everybody,” Ray said.

The Conservancy would like to preserve the property as permanent public open space, park and coastal nature preserve.

Banning Ranch Conservancy is willing and, in their opinion, able to buy the site, Ray said. They have $5 million set aside to start the process, he added, as well access to other financial a resources. They just need to see the price tag and a willingness to sit down and discuss it, he added, but they’ve been stonewalled.

“Not one offer has ever walked in our door,” Mohler replied.

Mayor Ed Selich noted that the Banning Ranch Conservancy has failed to present a financially feasible plan to purchase the property.

Either the land will be left unusable and waiting for funding that will never come or it could be developed into a project that preserves 80 percent of the property with restored open space and includes quality development, Selich said.

Supporters that spoke during public comment agreed with Selich, stating that the property is already in bad shape and will only go downhill if nothing is done.

“(If the land were to be left as is), the situation will only become worse,” said Newport Beach resident Marie Case. “The land is not going to heal on its own.”

Without the project, cleanup and restoration of the area is decades away, agreed Carolyn Cavecche, president and CEO of the Orange County Taxpayers Association. In the meantime, the property would continue to deteriorate.

“This is a good project,” Cavecche said. “Not only for the taxpayers of Orange County, but for the land itself.”

The site is a working oil field and it’s “not pretty,” Case said. The developer will spend millions of dollars to remediate the land, she said. She called it a win for the animals, plants and the community.

Opponents argued that the project would destroy sensitive habitats, increase traffic, that more development was not needed, and more. Several also mentioned that the application was incomplete.

The youngest speaker, Sebastian Shunda, said he is growing up next to Banning Ranch and sees a lot of animals near the open space.

“Save Banning Ranch for them and for my generation,” he said. “Nature should not become a distant memory in Orange County.”

More than 100,000 residents in the three cities that border the project will be affected, she said.

The majority of speakers echoed Leece’s comments and opposed the project.

“The community showed up in full force to support the staff’s recommendation to deny the project,” Banning Ranch Conservancy wrote in a message on social media. “All day, community members stood up and spoke about why this project would be so destructive to Banning Ranch and to the surrounding neighborhoods.”

They also encouraged people to attend the next Coastal Commission meeting.

“Without you, Banning Ranch would only be a memory by now,” Conservancy officials wrote.

Also on social media, NBR called the CCC’s hearing “epic” and  focused on the positive points from the commissioners.

“Commissioners said Newport Banning Ranch’s plans provide a unique opportunity to clean-up blighted oil field and grant public access to the 401-acre property that has been off-limits for a century or more,” NBR officials wrote. “They directed Coastal Commission staff to work with NBR over next 90-days to fine-tune redevelopment footprint and hammer out other details.”