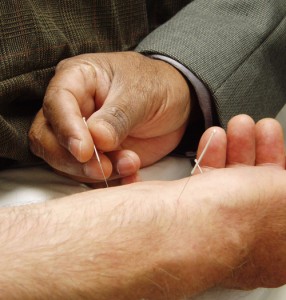 Aichmophobia, better known as the paranoia or fear of needles, usually originates from the pain caused by the variety of inoculations we get from an early age.

So why would anyone intentionally go to an acupuncturist to have needles stuck into their body?

The ancient treatment is thought to date back several thousand years, although most historians believe it was first practiced in China around 200 BC.

As one of several alternative or eastern medical practices, acupuncture has proven to be an effective treatment for various ailments.

I asked Jason Moskovitz, the chief practitioner from Tao of Wellness in Fashion Island, to share the three most common complaints that brings someone in for treatment.

“Pain relief, stress and women’s ob-gyn problems are the top three,” was his response. And he had his own story as to why he

“I was plagued by stress, sleeplessness and fatigue, and no one could diagnose the reason. They said I was normal but I knew that wasn’t true, and found acupuncture to be the cure that finally helped. That got me interested. I shared it with my friends who also benefited, and discovered a new career.”

That was 10 years ago. Moskovitz now runs the Newport Beach office of Tao, one of three satellite locations in Southern California. Tao of Santa Monica started in 2000 and is the main office, with another in Pasadena. The Newport Beach branch just celebrated its four year anniversary and is conveniently located next to the Edwards Big Newport Theater.

“The first needle is the toughest,” Moskovitz told me when I went in for an acupuncture treatment, but I found none of them to be difficult. The needles are much smaller than I expected, just a few inches long, and are inserted from just a few millimeters into the skin, up to about one-quarter inch.

Starting from my head and scalp he quickly made his way down to my feet until I was a mini-pin cushion, with about 18 or so needles protruding. When I asked about the number of needles the average person needs, he said that every person was different.

“Depending upon whether their complaint is chronic or from an injury will determine the placement of the needles. And every visit will be different.”

Fortunately I had neither type of pain, but I did have a “tell” that gave me away: my tongue. When I asked how he knew where to place the needles he told me that my tongue was a roadmap and indicated certain things and provided insight to the proper placement.

Acupuncture, along with chiropractic and other “non-western” medical treatments, has been criticized by skeptics, but over the decades has carved out a strong reputation for effectiveness.

“Western medicine has a place,” Moskovitz said, “but let’s be open-minded to new ideas. Whereas conventional medicine provides many treatments after the fact, with ‘anti this and anti that,’ acupuncture is designed to realign the body before any symptoms present themselves.”

So who can benefit from acupuncture? According to Moskovitz , they have patients as young as just a few days old until well into their 90s.