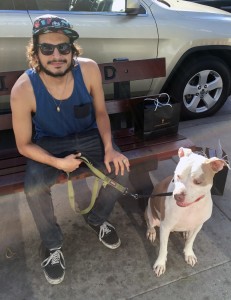 Jack, a three-year-old Pit Bull, “is really just a big baby,” claims 24-year-old owner Nathan Nunez, who was visiting Balboa Island, from Fullerton, with his wife, Karah, 23, on a recent sunny afternoon.

Jack sat statue still, laser focused on Karah, who kept appearing and disappearing while trying on fashions in one of the trendy stores.

The Nunezes have owned Jack since he was six months old. Jack also lives with and grew up with Turbo and Frankie, two domineering Chihuahuas that have their ways with Jack. About the only arguments these three pups have is when Turbo and Frankie collectively decide to lie on Jack’s chest when all he wants to do is nap in peace.

Jack loves other dogs, Nunez reports, and proved that claim when a passing poodle and he had a lick-fest. 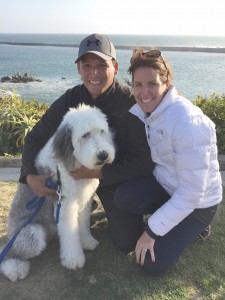 Ella, a six-year-old Olde English Sheep Dog, had to be strong-armed away from the TV, where she enjoys laying around watching “Animal Planet” and other reality shows, said her owners, newlyweds Frank and Courtney Nava of Newport Beach.

But don’t get the idea that Ella is lazy. She has mastered such tricks as pretending to take a nap on command, covering her face with her paws, wending through Frank and Courtney’s legs, and guessing in which hand a treat may be found. She also loves walks on the CdM overlook.

Ella loves to visit Stella, Courtney’s mom and dad’s older Olde English Sheep Dog, also a Newport Beach resident. But Ella did have to adjust to Courtney’s marriage, ultimately accepting that she is no longer the Alpha Dog in the house. 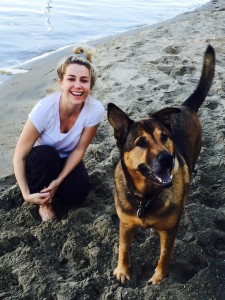 Gunnar is a certifiable American Hero. A “mutt, but mostly German Shepherd,” according to his owner, Newport Beach Psychologist Shannon Curry, Psy.D., Gunnar has been trained since the age of eight weeks to be a therapy dog.

He cut his teeth, so to speak, working for the past five years alongside Shannon at Hawaii’s Tripler Army Medical Center, where Gunnar in his unique loving way “counseled” soldiers in need.

Gunnar’s specialty is “obedience and gentleness” – critical attributes in the care of troubled service personnel.

When photographed with Shannon on the sands along the Grand Canal between big and little Balboa Islands, Gunnar was cavorting like a kid let out for recess. However, says Shannon, once she puts his service vest on him, Gunnar’s personality changes immediately: “He knows he’s on duty and he’s serious.”

Raised on Balboa Island, Shannon has recently returned from her Hawaiian assignment and has opened a private practice near Fashion Island, where she counsels service personnel per contract from the government, as well as private clients.

Gunnar is right alongside, eight hours a day – a mental health professional through and through.

In fact, one of her soldier patients, a creative storyteller and artist, just sold a comic book for publication in which Gunnar is the co-star alongside the soldier protagonist.

In real life, though, Gunnar is, and always will be, a hero to hundreds of human heroes who served in the American armed forces. We think Shannon is, too.