Friday was the start of the Newport to Ensenada Sailboat Race. The sun was shining early and we already had a light wind at the end of the Balboa Pier at nine o’clock in the morning. Our Indy staff meeting was held at Ruby’s at the end of the pier. The race committee was already at anchor and setting up the starting line. 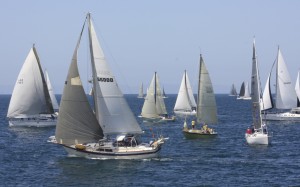 As the meeting progressed a few “early birds” were scouting the water and wind currents hours before the start.

If I understand the results correctly, “Loe Real” was first to finish and “Meanie” was first on correct time. Kudos to Dana Point Yacht Club for the most first place finishers, most winners and most entries. Congratulations.

The 50th annual “Lily Call” fishing tournament was held by the Balboa Angling Club. This event was for several fish species which had to be caught inside our harbor. Several of our normal catches were in hiding. Rob Meinnart landed a 1.98 lb. bass, and family member Kenny Knight landed the whopper of the weekend, a 3.89 lb. corbina. Bravo Kenny!

The catch amounts were quite minimal and discouraging. Talk around the docks was possibly our recent dredging, which causes massive turbidity, changed our bay bottom, and our fish skedaddled. Hopefully our normal fishing patterns will return. A few bat ray catches fooled their rod holders into thinking they had a tournament winner.

Lastly, our local fairgrounds hosted the annual fishing seminars and tackle show. There were hundreds of tackle booths, fishing boats, and morning and afternoon seminars. This event is always well attended, and the most recent state of the art lures are featured.

While our local tackle stores have tremendous manufactured inventory, the hard to find independent producers manned their booths. Many had photos of their unique tackle hooked up to whoppers.

These special designs can appear out of the ordinary but the pictures tell the story. The builders take the time to explain why their designs work and what methods are needed to ensure a quality catch. In addition to the tackle are clever fish related apparel and sun protection eye wear.

All seats were occupied for their off-shore seminars of catching white sea bass, yellowtail and dorado. The alternate lectures included on-shore bass species and halibut catches.

Television and DVD fishing show producer; Newport Harbor High graduate Michael Fowlkes, was front and center. Michael also is now a novelist and “Perfect Bait” is a local and south of the border book about sport fishing, pretty ladies, and a murder.