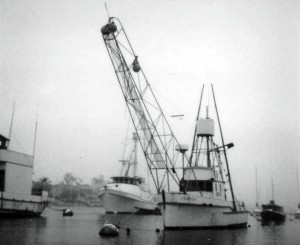 Is this a great life or what? Yaaahoooo!

This is what I was thinking following a newscast on TV when they showed trailer boats covered with several inches of snow on top. It was snowing and the blustery winds had the snow moving sideways. The newscaster mentioned the video was Wisconsin and with the wind chill it was minus 40 degrees.

I had to chuckle to myself as earlier, while watching the weathercast, I was thinking how disappointing I felt because our local temperature with no wind chill would be 100 degrees warmer. Are we spoiled or what?

The newscast then showed Chicago and the inside harbor, where they remove the docks and moorings for the winter, which was frozen over to their rock groin. The lake continued frozen over for several hundred feet. No wonder when my Dad left Chicago with his family at age 14 he didn’t return to the city until a nostalgic road trip with my Mom at age 69.

Once my grandfather came out in 1937 to build Prado Dam (near Corona), he knew he had found nirvana and constructed a varnished mahogany two-story home on two bay front lots in Bayshores. Following his move, he had his 40-foot Garwood cabin cruiser trucked here, which was built for a rumrunner to quickly scoot booze from Canada to Minnesota during the Prohibition days.

Last Saturday we received a call from two very old friends to join them at the Newport Harbor Elks Lodge for lunch. At the time the lovely Judy Belle and I were staying a few miles below the top of Ortega Highway. A few hours later we heard the roaring rumble of two fully dressed Harley Davidson motorcycles heading our way.

Parking in front of our convertible, (the closest thing to a boat), the gloss black helmets were removed and Dennis McGlasson and Steve Giannini emerged. I’ve boated and been friends with Dennis since I was about 11 when his family moved from Lido Isle closer to Newport Harbor High near our area in Cliff Haven.

I met Steve my freshman year at Harbor, watched his boating career emerge from his friendship with Steve Greyshock and his family, and a partnership with Steve (also known as Gilligan) for his boating life in Newport Harbor on their 40-foot commercial swordfish boat the Smokey in the 70s.

Steve then went on to captain the 120-foot Catalina Holiday for many years prior to a 20 year law enforcement career at the Irvine PD. During that time I recall he would sub-captain on the Catalina Flyer.

During the 70s I helmed the Jean Louise and sometimes the Buddy with Dennis while he would harpoon the beheaded and gutted 500 pound plus swordfish that are now extinct due to the U.S. and California governments allowing gillnetting in the 80s and into the 90s.

When gillnetting was allowed, most sword fishermen (including myself) knew this would end the swordfish population as we knew it, and our complaints to Sacramento in the beginning were spoken to the deaf ears of the bureaucrats who said they knew better because they were college educated Marine Biologists.

When the population was almost extinct, these bureaucrats had the bright idea that maybe they’d ban gillnetting. Really? And they wonder why fishermen don’t care for the Fish and Game, and Sacramento.

I’m including a nostalgic photo of the Smokey supplied by Steve. “Stick boats” were abundant on moorings in Newport Harbor until the gillnets. Now they are like the swordfish of the 70s: almost extinct.