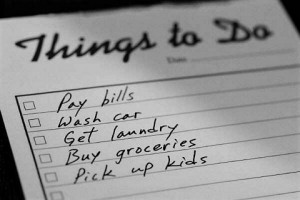 If my life were a comic strip, I would be in a boxing ring. Except there would be two of me.

The ring announcer would introduce us both:

Ladieeeees annnnd gentlemen, welcome to the Main Event! In this corner, weighing in about laundry not put away, garbage not taken out, and errands not done – undefeated in every fight for the last 16 years, current world champeeeeeen, Jill Never-Done-With Her-To-Do-List Fales!

And, in this corner, weighing in on all topics that are completed and totally finished, the contender, never having won a fight in her life – Jill All-Done-Guilt-Freeeeeeee Fales!

In the next section of the comic strip, the bell is rung and Jill All-Done-Guilt-Free Fales and Jill Never-Done-With-Her-To-Do-List Fales come to the center of the ring ready to fight.

Next, we see that Jill All-Done-Guilt-Free has been knocked out. She is lying flat on the mat, stars circling her head, her eyes, two X’s. Jill Never-Done remains the undefeated champion.

I haven’t read to Wyatt aloud in bed in weeks – oooh, a punch to the gut.

I still need to give the dogs a bath – left hook.

It’s little wonder why at the end of the day, moms sometimes feel beaten down.

Of course there’s not actually a physical fight going on, just the mental blows Jill Never-Done serves throughout the day and into the night. The boxing ring moves with the fighter. Even into bed. Sometimes as Jill All-Done-Guilt-Free tries falling asleep, she’s still taking jabs late into the night.

Can the underdog hope for a championship? I think so, but it’ll take a lot of training. First, moms need to learn to defend themselves, deflect the cheap blows. Next, they need to fight back. Here’s a move rarely used, but not difficult: “I’m proud of the dinner I made.”

Take that square in the jaw, Jill Never-Done Fales.

Or how about this one: “I got everyone fed this morning (including the dogs and guinea pig), made their lunches and got them to school on time.”

Round one goes to Jill All-Done-Guilt Free Fales.

If Jill All-Done is ever going to defeat Jill Never-Done, she’s got to get tough. First step – conditioning. Become strong by celebrating small victories. Got the car washed and went to the bank – Left hook, right hook.

Jill Fales is the mother of four and author of My Laundry Museum & Other Messy Gifts of Motherhood. Follow her on Twitter @JillFales.