On November 6, 41-year-old cyclist Paul Lin was killed in a collision with a vehicle in Newport Beach.

Debra H. Deem, 58, of Laguna Beach, was killed in a Newport Beach bicycle accident on August 27 after she was hit by a minivan.

Last year, two women cyclists were killed in Newport Beach within two days. In the past three years, a total of seven bicyclists have been killed on our city’s streets.

According to a report from the NBPD presented to the Newport Beach Bicycle Master Plan Oversight Committee last September, there have been more than 60 bicycle-involved collisions in Newport Beach this year. Of the crashes, more than half involved a motor vehicle.

In this three-part series, NB Indy writer Richard Simon – a veteran cyclist – explores the challenges of staying alive while bicycling the streets of Newport Beach.

I have been charged by a bull elephant, kicked by a full-grown ostrich (which dropped me faster than a Mike Tyson punch), and have come face-to-snout with a grizzly bear that snarled and salivated as we both stared in surprise.

I haven’t stopped seeking animals in the wilds.

In the mud-slathered highlands of New Guinea, the root-tangled track on which I trekked gave way, plunging me 40-feet down a water-slick chute onto a man-sized rock – the only obstacle between me and a 4,000-foot drop to the croc-infested swamps below.  My leg swelled instantly to more than twice its normal size, and I had four days remaining to limp to rescue.

Fifteen years ago, an impatient driver on Coast Highway in Corona del Mar pulled out blindly from behind a stopped car, then slammed into me as I was bicycling home.

That one stopped me.

Bicycling on our city’s roads ranks among the most dangerous things I’ve ever done.

Most road cyclists probably would report that they’ve all had “close calls,” citing everything from lane-encroaching trucks to drivers’ doors being flung open; from knocking the rear wheel of the bike weaving ahead of you, to going down on a puddle of oil from a leaky car. And those are just four of my personal examples from an intense cycling career that has spanned nearly 45 years.

Hector Monsalve, a Colombian Bronze Medal-winning Olympian and world sprint champion, enjoyed better balance than a circus acrobat, and was arguably the finest bike handler of his day.

Nevertheless, over the years Hector has been hospitalized 10 times, having suffered very serious road injuries caused by inattentive or uncaring drivers – and a bunch of “dumb” bicyclists. In fact, Hector has survived so many major bike accidents that cats should ask him for advice.

On the Department of Motor Vehicles’ website under the section called “Sharing the Road – Safety Tips for Bicyclists and Motorists,” this sobering paragraph stands out: “Each year in California, more than 100 people are killed and hundreds of thousands more are injured in bicycle collisions. Some bicycle-related crashes are connected to the bicyclist’s behavior, while others are due to the motorist’s lack of attention.”

Newport Beach certainly has not been immune to bicycle-involved accidents: In the past three years in our city, seven bicyclists have been killed on the road.

According to a 2010 report from the California Office of Traffic Safety, Newport ranked third highest among 103 similarly sized cities in the number of traffic accidents involving cyclists who were injured or killed.

The number of bicycle-related injuries in the United States each year is staggering: 900 deaths, 23,000 hospital admissions, 580,000 emergency department visits, and more than 1.2 million physician visits, resulting in an estimated annual cost of more than $8 billion.

Bicycling is a fun, exhilarating, and excellent conditioning sport; it is also an exercise in self-defense.

Mark Cohen, owner of Pro Bike Supply, a higher end, custom bike source on Old Newport Blvd in Newport Beach, said, “There has been a general shift in cycling…with many more cyclists concerned about their safety – especially since there appears to be a rise in the number of accidents” along with the “exponential growth of the sport in the last 10 years.”

Where serious cyclists used to worry about shaving every ounce off their multi-thousand dollar machines, today they make miniscule weight sacrifices by adding super-bright strobe lights to the front and rear of their frames that they activate whenever they go for a spin. Additionally, many add strobe lights to their helmets, and a growing number sport vests that incorporate reflective materials. This category is referred to as “be seen” lights.

Some athletes also clamp a “to see” lamp on their handlebars that casts an adjustable beam well ahead of them on darkened roads, while others may opt for the “miner’s” type headlamps, whose beam goes where the head swivels.

Understanding that there’s “always a battle between cars and bikes,” Cohen echoes many of the recommendations for bike safety that are shared in a variety of publications: avoid dangerous roads and intersections, avoid areas where there are no bike lanes, or where there’s cross traffic from driveways (as in Corona del Mar), always be defensively aware of all vehicles in relationship to yourself, and always look behind you with both hands on both brakes.

Every time a competent pilot prepares to take flight, he runs a “checklist” on the vital parts of his aircraft. Similarly, the Police Department recommends that you do the same on your bike, but what to check?

The NBPD has prepared a simple-to-read brochure that highlights a 13-point checklist:  brakes, tires, reflectors, lights, saddle/seat, handlebars, pedals and cranks, chain, frame and forks, bike lock, gears and wheels. It takes little imagination to see how failure of any of these can mean anything from minor discomfort to hospitalization.

The NBPD offers another list of ‘thumbs up” suggestions:  Be predictable when riding; wear helmet and eye protection; wear bright-colored clothing; carry identification; obey all traffic laws; ride with traffic; ride in the bike lane (or the farthest right of the lane); ride in single file; use hand signals; use head and tail lamps; ride with both hands on the handle bars and keep and maintain a clean bicycle. These rules apply to both adults and kids.

Unfortunately, these are behaviors seen daily, especially on the Balboa peninsula.

Next week, NB Indy writer Richard Simons examines cycling injuries and rules of the road in part two of “Cars Versus Bikes.” 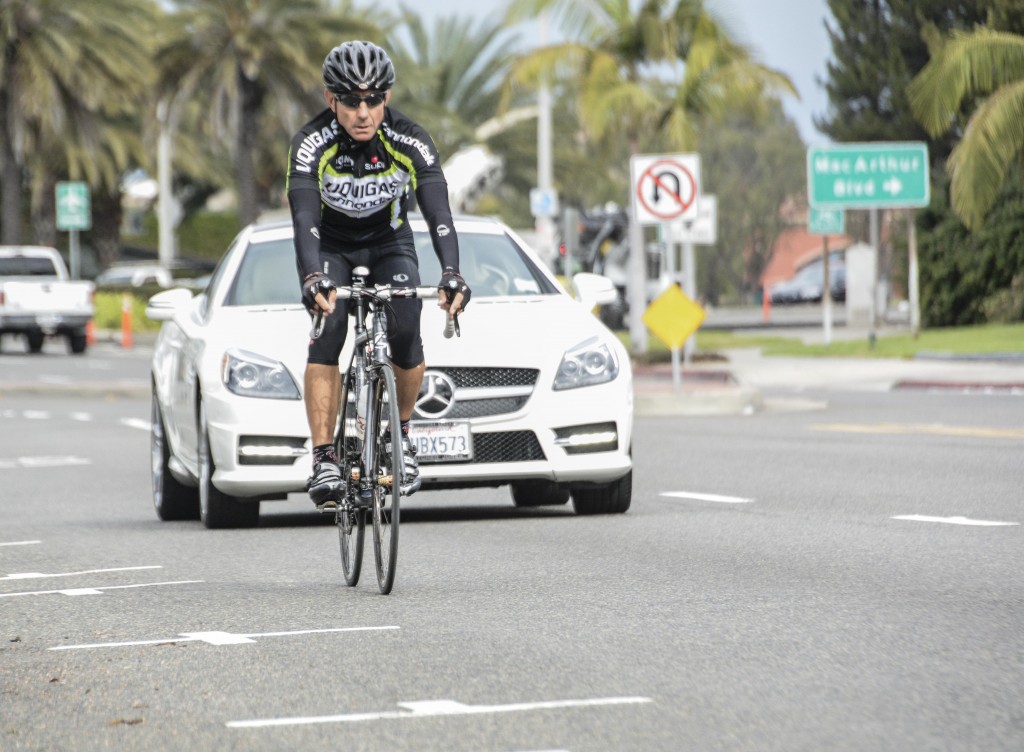