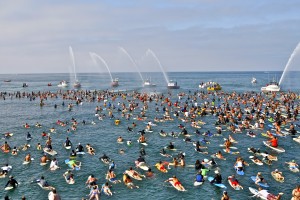 Two events celebrating the life of Lifeguard Ben Carlson were held last Sunday, July 13, one week after Carlson died while attempting to help a swimmer in distress.

On Sunday morning, hundreds of people of all ages sitting on surfboards formed a circle in the ocean just south of the Newport Pier as part of a paddle out tribute to Carlson.

Participants chanted Carlson’s name and splashed water as boats from Newport Beach Lifeguards, Orange County Sheriffs, U.S. Coast Guard, Long Beach Fire Department, and other agencies shot ribbons of water in the air. There was also a flyover by a rescue helicopter.

Thousands of people on the pier and on shore watched the ceremony to honor Carlson, the first Newport Beach Lifeguard to die in the line of duty.

In addition to the paddle out, a memorial service was held the same day at 6:30 p.m. on the beach at Orange Street in Newport Beach, which Fire Chief Scott Poster said was a favorite place for Carlson to surf, swim and think.

Lifeguards, civil servants, Newport Beach residents, and visitors from surrounding cities celebrated Carlson’s life. A large stage was erected on the beach near the water for a handful of speakers and family members, 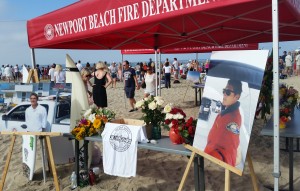 and chairs were placed in the sand facing the stage.

As the sun began to set, all ears turned to Chief Poster.

“Ben will live in our hearts where we will cherish his memory forever,” Poster said, “We will never forget. He was truly an awesome person.”

News of Carlson’s death made national headlines, reaching lifeguard communities near and far. Flowers were even sent for Ben from Honolulu.

Rob Williams, assistant chief of the Newport Beach Fire Department, Marine Operations, mentioned the mantra “lifeguard for life” during his remembrance speech, and explained the two different meanings of the saying. 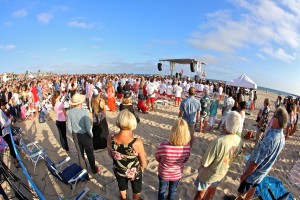 “Ben protected life day in and day out. He came to this job with a passion and served the people of his community with the highest standards.” Williams said. “He made thousands of rescues in his career, one not more important than the other. He truly protected life throughout his career.”

Williams told the massive crowd that whenever Carlson was at the beach, “in the water next to him everyone was safe. And knowing that he was in the waters of Newport Beach constantly, we knew we had another professional out there. Getting to know Ben’s family over the last week, I see where he gets it from.”

“He is not done protecting lives, surfing big waves, and living life to the fullest. Ben is a lifeguard for life,” Williams added, soliciting cheers from the colossal crowd.

From then on, the service was filled with shouts of “Lifeguard for life,” at key moments to enhance the fact that Carlson will not be forgotten.

Leeper described Carlson as “a true waterman,” retelling stories of Carlson saving him and his friends from a tiger shark, and giving CPR to a man while on a trip in Mexico.

“Ben, he didn’t sleep very much because his days were packed. He lived his 32 years to his fullest, he never settled at having one job, or one hobby, or one sport, and he would never back down from a challenge. His 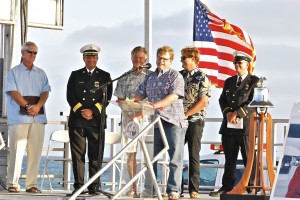 days would be full from start to finish, and I’d say an average 60 year old man would be envious of the résumé that Ben built over his 32 years,” Leeper shared with the crowd, who clapped in agreement.

“He brought a new influx of life and rejuvenation to everybody around him, and leave it to Ben to go out a hero,” Conway said.

Both friends were amazed but not terribly surprised at the amount of people that attended both the morning paddle out and the Celebration of Life ceremony.

According to Williams, Leeper, and Conway, Carlson had a huge impact on so many people’s lives, from junior lifeguards to the people he served drinks to at Wahoo’s Fish Tacos. 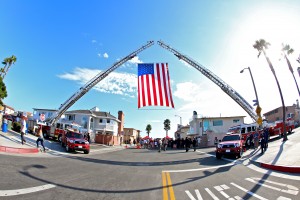 “Ben leaves behind a network of friends that are growing closer this week. As we move forward, all of our circles will grow tighter and tighter in memory of Ben. No matter which circle you were from they all are starting to intersect,” Leeper said.

Lifeguards and others put their arms around their friends, proving the bond Carlson created throughout his life.

Carlson noted his son’s love of finding big perfect waves, and the places he traveled to enjoy the sea, including Hawaii, Fiji, Indonesia, France, Spain, Costa Rica, and Puerto Escondido in Mexico,

“He loved the ocean, he certainly respected its power, but he loved everything about it, and he loved being part of it,” Carlson said.

A tolling of the bell ceremony is done when an officer dies in the line of duty. The bell ceremony at Carlson’s Celebration of Life was the first given to a lifeguard in Newport.

The Medal of Valor was rewarded to Ben Carlson and given to his father Chris and mother Terri by Chief Poster.

“He died a hero, the true definition of a hero,” Leeper said, adding “This week I have never been more proud to call myself a Newport Beach Lifeguard.”

Please include “Ben Carlson Scholarship Fund” in the memo line on the check. The Association is a 501(c)3 nonprofit, and all donations are tax-deductible.

Christopher Trela contributed to this article.