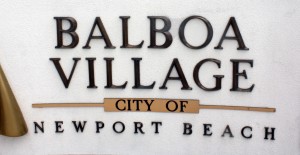 The plan, which is scheduled for a Planning Commission Study Session on Aug. 21, included two different strategies for commercial and residential parking.

For commercial areas in Balboa Village, a “park once” plan is the aim for Jim Campbell, a principal planner with the City of Newport Beach, as well as “better parking management.”

Among the plans is to fund commercial façade improvement, enhance streetscapes maintenance, and better signage to make parking less confusing and “more efficient.”

Employees parking in residential neighborhoods has been an issue in the Balboa Village for years, and Campbell informed residents present at the meeting that the plan will “encourage them to park in the lots” due to a cheaper fee given to employees.

What riled residents was the strategy for the residential neighborhoods: residential permitted parking. From 4 p.m. to 9 a.m., cars must have a permit to be parked between 7th street and Adam’s street if the plan goes into place. Most residents at the meeting liked the permit plan, but did not like the $20 per three years fee coming along with it.

“We should get a permit with no money,” Jill Mainare, an attendee of the meeting and Balboa resident said.

“This city should pay for the permits,” Marianne Zippi, another resident who attended the meeting agreed.

People at the meeting were concerned that they, the residents, would have to pay for the commercial parking problems.

“You have a problem with commercial parking with tourists and businesses. If you need a four story parking garage for commercial clients, build one. Just leave the people who own their homes out of it. It’s that simple, and that ought to be an option that goes before the council, not just this one,” one resident commented.

Building a parking garage, an effort supported by most people at the meeting, is the furthest thing from what the council plans on doing in these early stages.

“One of the things that we’re trying to do is to manage the existing parking resources as best we can and as imperfect it may be before we start building large parking structures,” Jim Campbell explained.

Mike Henn, the only city council member present at the meeting, said building a parking structure now would not be economically sound.

“The city council does not get it, at all,” Jill Mainare asserted, “And everybody on the peninsula you talk to will tell you they’re not happy, at all, with the parking.”

The meeting at times devolved from a conversation about parking to one attacking the city council. Henn attempted to calm the public and explain the reasoning for the different actions that are planned.

“We have a Balboa Village which is not performing well, in almost any sense. Almost no one really likes the selection of shops here. It has been decaying and declining for a long time,” Henn said, “So we’re trying to put together a plan here that will arrest and then reverse that decline. And one of the critical elements of this is to provide for parking where and when it is desired.”

According to Henn, the resident permitted parking idea was created by a group of residents who approached the council with a proposal to help fix the parking problem plaguing the area.

One man commented the permitted parking was the “only common sense approach I can understand.”

Some people suggested an idea to have shuttles for tourists and even employees to help quell the myriad cars entering the area.

Tom Pollok, CEO of ExplorOcean, agreed that a parking structure would help employees park away from the residential areas.

According to Henn, an idea for the entire peninsula to have residential permitted parking “is dead on arrival at the coastal commission for sure,” but assured the public that free permits for resident parking is “an open possibility.”