Huntington Beach native Danica Paulos remembers her excitement at seeing the Alvin Ailey American Dance Theatre at Segerstrom Center when she was a teenager.

Alvin Ailey returns to Segerstrom Center April 19-22 and Paulos will again be there, but this time as a member of the company.

Danica Paulos was five when her grandmother took her to her first dance show. It was “The Nutcracker,” produced by Orange County Dance Center. For Paulos, it was love at first sight.

“I was running up and down the aisle, dancing around, and she was like, ‘Okay, I’ve got to put this kid into ballet class,’” said Paulos.

Paulos started immersing herself in ballet. She attended dance intensives through some of the top companies in the word: San Francisco Ballet, the Kirov Academy of Ballet, Bolshoi Ballet, and American Ballet Theatre. But it wasn’t until she saw Alvin Ailey American Dance Theatre perform at Segerstrom Center when she was 15 that she was exposed to modern dance.

“It was a whole new, eye-opening experience—a pretty pivotal moment because that was a precursor to my interest in The Ailey School,” said Paulos. 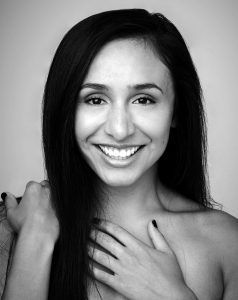 With Ailey on her mind, she finished her senior year of high school at the Professional Performing Arts School in New York City while also attending The Ailey School on scholarship. She went through the junior division and professional division programs, and decided to try out for the Ailey II company.

“I was so excited! I auditioned and I got in, and that’s when everything fell into place,” she said. “I was just so proud to go from The Ailey School junior division and work my way up.”

Paulos joined the main repertory company in 2014. During her time with the company she’s learned many pieces, new and old, but one of her favorites is “Ella,” a duo choreographed by Artistic Director Robert Battle.

“He choreographed ‘Ella’ a number of years ago. I wasn’t in it but I watched it, learned it and fell in love with it,” she said. “It’s been cool to really fall in love with the dance and now perform it.”

Another one of Paulos’s favorite parts of touring is community outreach.

“If we’re in the city for longer than three or four days, we usually do a mini-performance and fill up a whole theatre, possibly three thousand seats, with just students,” she said. “They’ll get to see ‘Revelations’ and an excerpt of Talley Beatty’s ‘Stack Up’ or Alvin Ailey’s ‘Night Creature’ and they’re just in awe. I remember going to see live performances when I was in elementary school and thinking, ‘wow, that’s what I want to do!’ I just remind myself that some little girl in the house is thinking that same thing. I’m so proud that we do so much outreach and so much giving back, I think that’s what Mr. Ailey wanted.”

Since its premiere in 1960, Alvin Ailey’s historical and cultural masterpiece “Revelations” is said to be the most watched modern dance work in the world, and is still performed today.

“Dancing ‘Revelations’ is a lot of responsibility,” she said. “It’s sacred and feels very special. The dance really speaks for itself. Mr. Ailey was a true genius and made the piece so authentic and timeless that it still speaks to so many people today.”

Catch Paulos and the entire Alvin Ailey American Dance Theater at Segerstrom Center for the Arts from April 19 to 22.