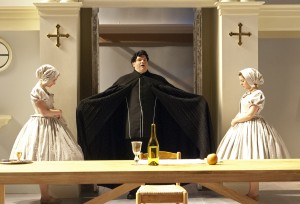 Haven’t scored tickets to the sold-out “The Book of Mormon” at Segerstrom Center?

Not to worry, there are several tempting shows to be savored this sultry Orange County weekend, each with its own hot-hot-hot mission and message.

Inspired by Italian commedia dell’ arte, Molière’s 17th century classic is a societal commentary with a two-faced title character full of faux piety and tricky as a prestidigitator.

A clever opportunist, Tartuffe preaches propriety to all while lusting after the too trusting Organ’s wife and daughter behind his back. The play sheds a strong light on the religious mores and polite conventions of the time while underscoring a darker side of worldly appetites. It’s an unfortunately evergreen double standard, which keeps the 350 year old story fresh for today’s audiences.

Directed and re-imagined by Dominique Serrand in his SCR debut, this latest production of “Tartuffe” is the perfect piece to complete SCR’s banner year: it was the play that started it all, opening the theatre’s very first season in 1964.

Find your “Bliss” at SCR—it was first performed in 2000 from Woolery’s original script, and has been adapted this year for South Coast Repertory’s Teen Players ensemble, where it’s being directed by

Hisa Takakuwa. The story revolves around Sydney, an unhappy teenage girl from Happy Valley who heads off in search of excitement and finds enlightenment- along with a crazy cast of characters from artists to rock stars, who teach her about life.

“I almost want to compare it (“Bliss”) to a modern day Alice in Wonderland. There’s a sense of adventure to it and a controlled chaos,” said Teen Player Christopher Huntley, who was cast in several roles including “Slacker” and “Laertes.” The 16 year old Newport Beach native was heading to a tech rehearsal as he reflected on how other teenagers might relate to the show.

“I think Sydney goes through a lot of existential crises, and it’s kind of a parallel to journeying into adulthood. There’s that daunting feeling of standing at the edge of a precipice,” he stated with the assurance of youth. “The play is about the feeling that it’s okay to make mistakes. Uncertainty is there, but you’re not alone however isolated you feel.”

Heim, who worked with 17- and 18-year-old skateboarders in creating the swift, bold, extreme-sport style movements for “Transit Space,” discovered similar insights during the creative process.

He asked one, “Do you worry you will get hurt?” The youngster replied, “If you worry about everything that is going to happen, you cannot move forward in life.”

“There is a looseness of movement that as adults we forget about,” noted Heim during a phone interview before the work’s L.A. premiere last year. “They just have to be completely relaxed and at one with the board. With “Transit Space” it’s about the unit, and one individual connects with the group. To be able to function at peace with himself, to go further in life, he needs the group.”