There is an unofficial operatic Top Ten list of the most frequently performed operas in the world.

One of those is “La Traviata,” Giuseppe Verdi’s ode to love, or love lost. First performed in 1863, “La Traviata” is known for its rich score, including “Libiamo ne’ lieti calici,” a drinking song often performed in concert by many noted tenors including the late Luciano Pavarotti.

The story, not unlike the movie “Pretty Women,” concerns an aristocrat who falls for a “working girl” (the courtesan Violetta) with a heart of gold. However, like most operas, everything goes wrong.

What goes right is the Pacific Symphony’s staged production of “La Traviata” that is available for streaming through July 4.

The Pacific Symphony’s opera presentations fill a void left by the demise of Opera Pacific, which had produced professional opera productions at Segerstrom Center for the Arts for more than two decades prior to the opera company closing its doors in 2008.

Opera is also part of St.Clair’s DNA. For several years he served as music director of the Komische Oper Berlin, an opera company in Berlin, and he has conducted operas around the country.

The Symphony’s staged operas are remarkable in that they use minimal costumes and sets, but the live symphony along with world-class opera performers ensures a sensitive and artistically robust production. This “La Traviata” is indeed sensitive, and robust. 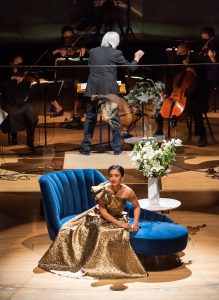 According to information from Pacific Symphony, stage director Robert Neu (who has directed more than 100 opera productions around the country) said he decided to “capitalize on the psychological journey of these three fascinating characters. You will see each character relive his/her tragic past in his/her own mind.”

To assist with this vision, 12 cameras were used to film this semi-staged opera in the Renée and Henry Segerstrom Concert Hall.

After watching Pacific Symphony’s version of “La Traviata,” I was impressed on many levels.

First, the orchestra was spaced in “socially distanced” sections of the stage, yet the sound was lush and full—as it would have sounded if this was a completely staged opera. St.Clair commanded the podium with his usual flair.

During the performance, I felt like I was watching a PBS special, thanks to the multi-camera filming that captured the action and emotions at the perfect moments.

The subtitles were easier to read on my screen than if I had attended a traditional opera and had to veer from the supertitles projected above the stage to the action on stage. It almost seemed like I was watching a foreign movie. 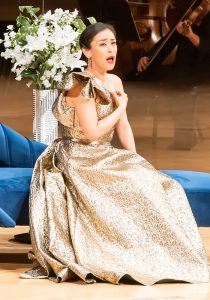 The duets were well matched. López (Violetta) has a superb voice and was emotionally introspective.

The set was simple, yet worked perfectly for this staging. It was refreshing to hear familiar arias in context rather than in concert.

And I have to admit it was nice to be able to start and stop the video performance as needed.

This production of “La Traviata” is paired down with no chorus and only five actors/singers, but it works perfectly.

“La Traviata” is available for streaming online until July 4. Tickets are $25 for 28-day household access (use the promo code “Opera” to pay only $20.)

For more information or to purchase tickets, call (714) 755-5799 or visit www.PacificSymphony.org/Traviata.