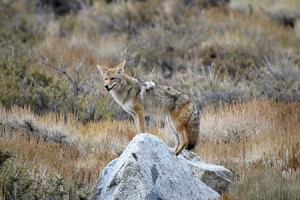 The moment she walked into her Harbor View Home, Mary Ann Soden knew something was terribly wrong. Her 12-year-old wire-haired dachshund, Deli, wasn’t there to greet her.

Soden found Deli outside in her fenced yard, curled up below a six-foot-high fence and beneath a bush, barely conscious, bleeding from more than 30 coyote bite wounds around the neck, plus others across her torso and rear.

The evening had been coordinated by Speak Up Newport.

Audience comments at the often-contentious meeting ranged from the emotionally charged and angry to those few who, like Westcliff resident Tom Damiani, said, “The officers were there to share information; they were treated rudely. There was too much yelling, and no listening.”

Corona del Mar resident Geoff Wiegman, frustrated at the city’s perceived inaction regarding aggressive coyotes, threatened to shoot the predators on sight if ever he spotted one in his backyard.

Responding to his comment, NBPD Sgt. Rachel Johnson calmly explained, “It is illegal to use a firearm in the city, even in one’s own backyard.” She added that “the chances are high that a bullet would go through the animal and unintentionally strike something beyond.”

Most of the evening’s fireworks, however, were leveled at Department of Fish and Wildlife Lt. Ken Smirl, the agency’s Natural Resource Volunteer Coordinator, who patiently attempted to explain the pilot program of coyote control currently being refined between state, county and city. Those include citizen education about coyote behavior and how citizens should respond and react to coyote interaction, as well as steps that agencies will take according to rated encounters and animal behavior.

According to Smirl, the agencies have created a four-tiered color code system for when coyotes are spotted: Green means that a coyote has been seen, but not acting aggressively; yellow signifies that the animal was losing fear; orange indicates that pets have been attacked and red denotes that a coyote came into human contact.

Smirl said that he has made more than 100 such presentations throughout the county, and that he “fully understands the fears and emotions” voiced by pet owners.

Comprehending the role of coyotes in an environment is an important part of coexistence, Smirl shared. In Newport Beach, the coyote is “the top wild animal predator. They keep small animals in check.”

“What brings them to an area is food,” he said, “intentional or unintentional feeding, food for pets left outside, fallen fruit and accessible trash containers.”

Draught also attracts them to neighborhoods, where pools, ponds and sprinklers provide easy water. As well, both natural and man-made shelters prove magnetic.

But perhaps the most important attraction, Smirl said, is “untended pets.”

Feral cats, or those felines left outside homes, are common coyote fare. And, of course, small dogs innocently left in a yard are favorite prey.

A coyote can smell prey more than a mile away, and will follow the scent trail right to Fifi’s open-air enclosure. Unbeknownst to many homeowners whose yards are walled in, adult coyotes can clear obstacles in excess of six feet in height.

Coyotes that are well fed become “habituated,” Smirl said, and in the process lose their natural fear of humans. The more sustenance obtainable, the more reproductive coyotes will become.

“Take away their food,” Smirl suggested, “and their reproductive prowess will be diminished.”

To that end, Orange County has created a program called “Wildlife Watch,” in which the county’s Animal Control Department will work with local agencies to help mitigate the coyote problem through a two-prong program to both educate and deal with the animals. A team of Wildlife Watch volunteers is available for neighborhood instruction.

Radiologist John Wahlen of CdM recounted three coyote encounters on Poppy Street within the last six weeks. The first occurred at 6:30 a.m. while he and his girlfriend walked in the middle of the street. An insouciant coyote trotted right at them, passing less than 10 yards away with nary a glance.

“He wasn’t bothered by us at all,” Wahlen said.

The second encounter took place at 8 p.m. Now aware of coyotes, Wahlen stayed with his little dog on their front grass. Then, “I heard a pitter-patter on the street and saw a coyote charging us,” he related. At 10 yards, “I yelled. At seven yards, it stopped and stared at me.”

In the latest instance, Wahlen let his girlfriend out of their car at the corner, at which point he noticed a coyote in the middle of the street. Despite Wahlen honking his horn and flashing his high beams to frighten off the animal, the coyote ignored this light-and-sound show and charged his friend. As she screamed, the coyote finally stopped about 15-feet in front of her. It wasn’t the coyote that left the scene fazed and scared.

Neither of them walks after dark any more, but if they do, he says, “I’ll always take a golf club with me.”

“Coyote stories often get blown out of proportion,” said NBPD Animal Control Supervisor Valerie Schomburg, referring to accounts blared across social media. “We have to hear directly from the citizens. Call us immediately,” she implored, “we’re the ones who have to respond.”

Coyotes are, in fact, wily and elusive, but Animal Control might have a chance to discourage them from returning.

Although several attendees yelled during the meeting to “Kill them all!” the reality of that happening is non-extant, said Department of Fish and Wildlife’s Lt. Smirl. They are here to stay, and in fact play an important role in the natural balance of rodent populations, as well other small critters. If it weren’t for the predatory food chain, rodent numbers would swell noticeably.

Additionally, scientists have shown that “eradication (or relocation) of urban coyotes actually provides a vacuum in nature that causes these animals to have even larger litters, and, ultimately increase the coyote population.”

Coyotes have survived and thrived for more than 1.6 million years, adapting to a broad variety of environments, including, of course, cities and suburbs, as well as wilderness.  They go where the food is, and where they (like all of us) can survive in relative security.    Though definitely not domesticated, they are comfortable alongside humans, states the Coyote Activity Bulletin published by the NBPD.

Coyotes normally are not a danger to humans, but that doesn’t mean one must eschew common sense around them. And that doesn’t mean that coyotes won’t become threatening or aggressive, and may do so when traveling in small packs and sensing a creature’s vulnerability.

Coyotes learn and adapt quickly, as proven by their success. To that end, NBPD recommends using “negative reinforcement” should coyotes frequent one’s neighborhood. Negative reinforcement, sometimes called “hazing,” includes making loud noises, throwing rocks or other items at them, shaking cans with rocks inside, or spraying them with garden hoses or vinegar-laced water from spritz bottles.

More hazing tips are available at humansociety.org (search for Coyote Hazing), or at the police department website.