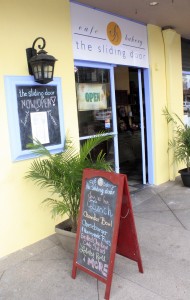 At this week’s city council meeting, an interim ordinance allowing A-frame signs in the Balboa Village commercial zoning and mixed-use zoning districts was approved on a one-year trial basis, 7-0.

All A-frame signs permitted under the proposed interim ordinance will be subject to the same regulations that the city council adopted for Corona del Mar.

The proposed interim regulations would control the location, number, size and design of A-frame signs.

Staff report notes that the ordinance would allow signs within 10 feet of the primary entrance of the business or of a pedestrian plaza, courtyard, or arcade; they cannot interfere with pedestrian ingress or egress as required by the Building Code or Fire Code; they must be separated by a minimum distance of three feet from another A-frame sign or other type of portable sign (i.e., restaurant menu signs); they shall not obstruct parking spaces or vehicle maneuvering areas; they shall not be located in landscape planters; and the cannot impede vehicular sight distance.

Tenants are allowed one A-frame sign that has a maximum of 10 square feet per sign face. The sign cannot be taller than 48 inches, and can only be displayed during regular business hours.

A number of businesses in Balboa Village have been displaying A-frame signs in anticipation of the interim ordinance.

The revitalization of Lido Marina Village took another step forward this week when the city council approved a request by the owners of Lido Marina Village to install recessed planters, raised planters not to exceed three feet in height, decorative wood deck pedestrian crosswalks, bike racks, and private landscaping and irrigation improvements within the Via Oporto public right-of-way.

To do this, the city council waived Council Policy L-6, Private Encroachments in the Public Rights-of-Way, to allow the above improvements that encroach in excess of one foot into the Via Oporto public right-of-way.

According to the staff report, the design concept for Lido Marina Village was presented at the city council study session on January 14, 2014 and at the Planning Commission Study Session on February 6, 2014.

At that time, staff identified that most of the approvals will be at the staff level with the exception of the private improvements within the public right-of-way, the harbor side improvement (boat slips and boardwalk) and the Conditional Use Permit (CUP) for the reduction of on-site parking requirements.

The staff report notes that the harbor side improvements are currently being designed and will require approval from the Harbor Commission. The CUP for the reduction of on-site parking requirements will be reviewed by the Planning Commission next month.

According to the staff report, in August 1973, the former owner of Lido Marina Village entered into an agreement with the City to install private improvements within the Via Oporto right-of-way. Those improvements included brick paving street and sidewalk surfacing, raised landscaped planters, a fountain, decorative street lights, private landscaping and irrigation improvements and appurtenances.

As a part of the current Via Oporto improvement work, the raised planter in the middle of Via Oporto will be removed, the brick paving street and sidewalk surfacing will be repaired and the decorative street lights will be replaced.

The owners are also proposing to install diagonal metered parking and private landscaping and irrigation improvements on Central Avenue.