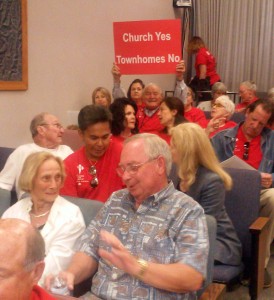 An overflow crowd of 200 people packed into the old city hall council chambers and spilled out into the lobby for a District 1 Town Hall meeting, organized by Mayor Pro Tem Diane Dixon, whose district includes West Newport, the Peninsula, Lido Isle, Bay Island and Newport Island.

The main topic of the meeting was the recent sale of St. James the Great Episcopal Church.

Parishioners wearing red t-shirts swarmed the meeting and voiced their concerns about the recently discovered pending sale of the church at Via Lido & 32nd Street to developer Legacy Partners Residential, Inc. for approximately $15 million.

According to a press release issued by the St. James congregation, The Rt. Rev. J. Jon Bruno, Bishop, Diocesan of the Episcopal Diocese of Los Angeles, has entered into an agreement to sell St. James the Great Episcopal Church property and buildings, located at 3209 Via Lido, to a developer

The congregation was notified of the sale on May 17, and have been told that the last service in the facility will be on June 28, 2015

Four parishes in the Diocese disaffiliated with the Episcopal Church in the mid-2000s over theological differences.  St. James Episcopal Church, as this property used to be known, was one of the churches that aligned with the Bishop of Uganda and became St. James Anglican Church. 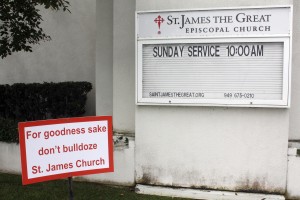 legal effort. The St. James property was returned to the Diocese in September 2013.

In October of that year, Bishop Bruno appointed Rev. Canon Cindy Evans Voorhees as Vicar and asked her to revive the parish as St. James the Great Episcopal Church.

After being flooded with emails about the situation, Dixon said she knew she had to add the issue to the town hall meeting’s agenda to help clarify and answer questions.

While visiting a fundraiser event at the church in March, Dixon said she heard rumors about a sale, but heard nothing else about it since.

“The city had no part in the negotiations. We were just as surprised when we heard the news,” Dixon told the Town Hall meeting attendees.

Community Development Director Kim Brandt gave an overview of what to expect from the sale and the approximate approval time, which could take up to two years.

Questions poured forth to the city staff, such as what is going to be built on the property and how long until the congregation has to leave.

“An application has to be filed first with the city. Once received, we will have a better view of the situation and can answer questions in more detail,” was the repeated answer from Brandt.

Phil Bettencourt of Bettencourt & Associates is the community planner and outreach spokesperson for Legacy. He provided a quick fact sheet at the meeting with contact information. It cited senior managing director at Legacy, Timothy O’Brien, a resident of Lido Isle.

According to the fact sheet, the current planning vision is for “luxury residential for-sale homes, no apartments.”

Brandt said the process doesn’t happen overnight and there are requirements from both the city and the Coastal Commission that need to be met.

Part of the process explained in the quick fact sheet includes an environmental study, general and coastal land use amendment, zone change, site development review, and approval for a concept and coastal development permit.

The two parking lots that go along with the property are designated for Mixed Use Horizontal 4 or MU-H4, which suggests development is acceptable if it establishes the character of a distinct and cohesively developed district. Multi-family residential, neighborhood commercial or mixed structure use with storefronts on bottom and residential above are allowed.

An amendment to the city zoning code is needed for any residential or commercial projects to be built on the church property itself.

No amendment or application has been filed yet with the city.