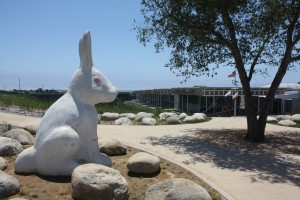 At Tuesday night’s City Council meeting, the council voted 7-0 to authorize staff and members of the City Arts Commission to move forward to implement a temporary sculpture exhibit in the Civic Center Park.

The rotating exhibit would begin in May 2014 (to coincide with the one year anniversary of the civic center and park) with a maximum of 10 sculptures, with an additional 10 sculptures added in 2015. The sculptures would be in place for two years before being de-installed.

As part of the agreement, the council authorized City Manager Dave Kiff to send a letter to the Orange County Museum of Art ending a June 2010 Memorandum of Understanding, and also approved a budget amendment to appropriate up to $125,000 for the first year of the temporary sculpture exhibit.

Prior to the vote, Arts Commissioners Caroline Logan and Carole Boller made a presentation to the council that included images of public art in other cities as examples of what could be done in the park.

“The members of the City Council have expressed a wish to have high level sculpture in the extraordinary new Civic Center Park, as planned by our renowned park designer, Peter Walker,” said Commissioner Logan. “The Art in Public Places Ad Hoc Committee has taken this to task and is proud to present for your consideration, the Arts Commission’s Sculpture in the Park, Public Invitational 2014 to 2016 sculpture exhibition project.”

“This project as recommended can be tailor-made to best fit into any possible budget; it has the ability to be maximized or minimized without a loss in quality,” noted Commissioner Boller. “The initial Sculpture Park project recommendation, officially approved by the Arts Commission, is designed for 18 original high quality sculptures to be installed throughout the length of the new Civic Center Park, drawing visitors to enjoy the entire park.  The sculpture pieces would be on loan to the City for a two year period, opening with an exciting exhibition dedication celebration in May 2014.”

“The Arts Commissioners based the concept of this project on similar hugely successful two-year cultural arts sculpture projects throughout the country, forming it around our own city of Newport Beach,” added Commissioner Logan. “Comprehensive information was researched to develop detailed responsibilities, marketing, costs, Call to Artists, publicity, docent and self guided tours, and support materials.”

Commissioner Boller explained that a contracted project arts coordinator or site manager would start the process of a Public Artist Call for Entries as soon as possible, and will work with the Arts Commission’s Art in Public Places Ad Hoc Committee. Once the pieces are commissioned, they will be brought before the City Council for review and final approval.

“What I hope we can accomplish with our new emphasis on enhancing arts and culture in the city is create or further enhance the arts community in Newport Beach,” said Councilmember Mike Henn. “Have you given thought as to how to stimulate local entries, or resident artists?”

“We want this to be open to anyone in Orange County, especially our own community,” replied Commissioner Boller. “The honorarium is $2500, and the cost to move sculpture 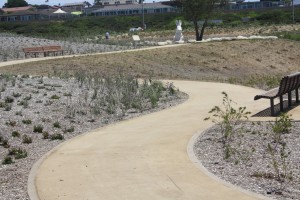 from New York and back would eat that up very quickly. So, we’re looking to artists in our own area.”

“What the arts commission did on their own was look at other programs and they came up with their own proposal,” said Kiff. “If you like this concept, we’ll go back and look at how to accomplish their goals. Hopefully you will bless and endorse this program.”

“On setting aside the MOU, correspondence indicates it is of mutual consent, but there is nothing that would preclude any further partnerships” with OCMA, said Councilmember Tony Petros. “Is there an opportunity at year’s end to evaluate this? We can come back and see how effective it was, did it go well? I would like to see something at the end of the first year where we get to evaluate.”

“Is the date of May of next year achievable?” asked Councilmember Ed Selich.

I think it is,” replied Kiff. “The arts commission put together a pretty good timeline.”

“I think the art commission has done a terrific job on this,” said Councilmember Selich. “This is an opportunity to do a program that has been done in other cities successfully.”

During public comment, Newport Beach resident Jim Mosher suggested that “since this is public art, the public would be more interested in the result if they participated in the selection, so that we have the community’s taste and not the more sophisticated taste of the curator.”

As noted in the staff report, the City Arts Commission has been actively involved in pursuing appropriate pieces for display and has recently been successful in placing “Uprooted II” by local artist Sarah Wilkinson just outside the City Council Chamber.

According to the staff report, a consultant to manage the project would be engaged to manage the entire project, from the initial call for submissions, through vetting the submissions for compliance with Commission and City requirements, to the installation and de-installation of the pieces.

The initial Arts Commission proposal called for 18 sculptures, but Staff recommends that 10 pieces would be a more easily managed first effort commencing in August, 2013, given the extremely tight timeline proposed by the Arts Commission. Those pieces would remain on display from May, 2014 through April, 2016. Further, staff recommends that 10 additional pieces could be selected for inclusion in a second year project with installation completed in May of 2015, running through April, 2017. Thus, in May of 2015, there could be 20 pieces on display. If the concept is successful, rotating exhibits could be employed as a means of freshening the sculpture collection while working to acquire permanent pieces.

The project timeline calls for a consultant to be selected by the end of August. The consultant would then begin creating various forms including: master calendar; list of potential artists and art registries; and the call for artists entry. All entries would be received by November and

vetted for inclusion in the project. The proposed pieces would be presented to the Arts Commission at the November meeting, with those selected being forwarded to City Council for approval in either November or December. In December, all entrants would be notified, whether selected or not, to move forward in the process. By January, the site selection of all pieces would be completed and Public Works staff would begin work on construction of the pads for sculpture installation. The consultant would develop and implement the media plan during February and March. In April, the sculptures wouldbegin to arrive for placement, and the exhibit would open on Saturday, May 3, 2014.