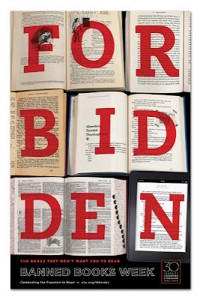 This week, we celebrate our freedom to read, as the American Library Association presents its annual Banned Books Week.

Each year, book lovers everywhere use this week as an excuse to climb up on their soapboxes and preach the values of not only the written word, but our ability as Americans to read how, where, and what we want. Each year, I join them.

I see restricting the availability of literature, for whatever reason, as simply archaic. And frankly, in an era in which, with two clicks of a mouse, my children can watch Miley Cyrus ride a wrecking ball in her birthday suit, I think that, as a society, we’ve got much bigger fish to fry.

That being said, I concede that every book is most definitely not appropriate for every audience. Being the mindful parent that I am, I determine what reading material is acceptable, in much the same manner as I decide which movies to let my children see, or which recreational activities are age appropriate. The key concept however, is that I decide based on what my family’s values are, rather than having the decision made for me.

While, most likely, no one would bat an eye at works like “Fifty Shades of Grey” appearing on the banned book list, for obvious reasons, you might be surprised at some of the more ridiculous reasons cited for why books should be removed from shelves.

For example, Shel Silverstein’s “A Light in the Attic” was opposed because it contains a poem that “encourages children to break dishes so they won’t have to dry them.” You should also exercise caution when letting your children read “Where the Sidewalk Ends,” another work by Silverstein, as it “promotes cannibalism.”

“Harriet the Spy” by Louise Fitzhugh, apparently actually “teaches children to spy,” while other beloved children’s books have been challenged for “having a sad ending.”

In reality, sometimes in life sad things happen. Books can help children cope with their own feelings, and discover that they are not alone in their experiences.

Noah Berlatsky hit the nail on the head in his article for The Atlantic, when he said:

“The truth is, outside of arithmetic, it’s hard to teach anything worth learning that someone won’t find offensive or upsetting or frightening or off-putting. If it’s interesting, if it’s something people care about, then people are going to have opinions about it. That means somebody, somewhere, isn’t going to like it. The drive to keep our children perfectly safe from dangerous knowledge just ends up reducing their education to a bland, boring, irrelevant slog.”

Often times, books that are challenged are those that depict times in our history that we would sometimes rather forget. We memorialize these events in writing, however, for exactly that reason – so that we never forget, and we let our children read and learn about them in the hopes that they will grow to be a more enlightened and accepting people than the generations that came before them. By hiding these books away, we rob our children of the opportunity to learn from our mistakes.

For a full listing of books that have been banned or challenged, visit ALA.org.