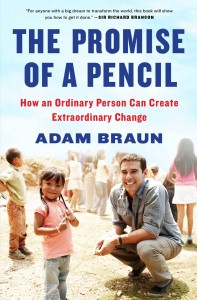 In the days leading up to the start of a new school year, every parent in America is consulting school supply lists, checking backpacks, and doing the requisite shopping.

Per the school’s wishes, they are buying every writing utensil in sight, despite the fact that there is no way one student will possibly need 24 black pens, 24 blue pens, 12 red pens, and 48 sharpened pencils.

During my annual rush to keep Paper-Mate and Ticonderoga in business, I began to reflect on a book I had seen recently, “The Promise of a Pencil: How an Ordinary Person Can Create Extraordinary Change,” by Adam Braun.

As I filled my cart, fully aware that at least 50 percent of what I was purchasing was extraneous, I thought about what a difference those tools could make to a child whose reality was far removed from that of my own children.

So, I looked up the title I had previously bookmarked, and headed to Barnes and Noble to pick up Braun’s book, the Under Cover Book Club selection for September.

“The Promise of a Pencil,” is a memoir detailing Braun’s journey from privileged college student on the path to a brilliant career on Wall Street, to founder of a foundation currently providing education to underprivileged children in Ghana, Guatemala, Laos, and Nicaragua.

Although raised in Greenwich, CT, in a community where wealth was commonplace, Braun’s family stressed hard work, and the satisfaction inherent in a

job well done, rather than simply providing their children with easy access to unnecessary luxury. Their family catch phrase, “Brauns are different,” was meant as both a call to excel, and a reminder to be true to one’s own values, rather than what was acceptable to society.

As Braun grew older, he mastered the ways of the financial world, but began to feel an increasing need to discover meaning in his life, and connect with a purpose higher than the almighty dollar.

While traveling abroad, Braun met an Indian child, begging in the street. When asked what he wanted most in the world, the child replied, “a pencil.”

Braun recounts: “I reached into my backpack, handed him my pencil, and watched as a wave of possibility washed over him. A smile erupted and his eyes brightened. And I saw then the profound power and promise brought through something as small as giving a pencil to just one child.”

Hoping to one day open a school, providing educational opportunity to underserved children in a developing country, Braun opened a bank account with a single $25 deposit in 2008.

He states, “I was just a regular guy with $25 who wanted to prove that regardless of age, status, or location, every person has the capacity to change the world.”

Using his own unique “for purpose” business plan, he merged his expertise in the business world, with his charitable ideals. Today, his foundation, Pencils of Promise, has broken ground on 200 schools worldwide.

“The Promise of a Pencil” serves as both memoir and blueprint for anyone with a big idea they need help getting off the ground. Each of the book’s thirty chapters are titled with mantras that Braun credits as guideposts that helped him navigate his way through a myriad of decisions, both large and small.

One of my favorite titles is Mantra five, “Do the Small Things That Make Others Feel Big.” This notion is readily available to each of us, every day, regardless of income or social standing. It can be as simple as sharing a smile, or paying it forward in a coffee line – little things do mean a lot.

The founder of Change.org, Ben Rattray, put it perfectly when he said, “Adam represents exactly the shift our world needs – one where the brightest minds of our generation focus on addressing the most important problems of our time.”

To borrow Braun’s words, we can find more fulfillment in life by measuring it in purpose, not profit. I hope you will join me in becoming inspired by his story to create change of our own.