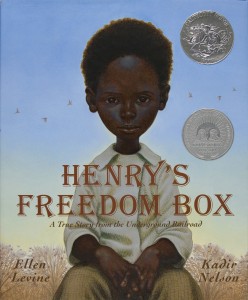 This Saturday, Feb. 22 at 11 a.m., Barnes and Noble in Fashion Island will present a very special story time as they share the book, “Henry’s Freedom Box:  A True Story From the Underground Railroad,” by Ellen Levine.

Henry “Box” Brown was born into slavery in Virginia in 1816. As a slave, he was afforded none of the freedoms that we mindlessly enjoy, and in fact, didn’t even know how old he was exactly, since no one bothered to record things like slaves’ birthdays.

Told at a young age by his mother that the leaves blowing in the wind were “torn from the trees, like slave children are torn from their families,” Henry found this to be the sad truth, when he was separated from his family and sent to work for his master’s son.

While working in the tobacco factory of his new master, Henry met another slave, Nancy, and they fell in love. After receiving permission from their masters, the two married and started a family. Unfortunately, we are reminded again about the heartache that life as a slave was sure to bring, when the master sold Nancy and the children, and Henry once again saw his family disappear like leaves blowing on the wind.

Illustrated by the Caldecott Award winning artist, Kadir Nelson, the book offers a series of beautiful portraits that depict Henry’s journey from innocent boy, to heart-broken young man, and finally, the determined adult that, unwilling to have any more of his life stolen from him, found a way to freedom.

That journey to freedom, attempted by so many, yet completed by so few, was undertaken by Brown in a most ingenious way. He devised a plan to ship himself as cargo to a place where there are no slaves. With the help of others, he sent himself in a crate to a Quaker businessman in Philadelphia.

Over the course of 27 hours, Brown and his box traveled by wagon, railroad, steamboat, wagon again, railroad, ferry, railroad, and finally a delivery wagon to their destination. During the trip, the box, despite its marking of “handle with care,” was jostled, tossed, and turned upside-down, but still its secret cargo managed to stay still and avoid discovery.

The book ends with the opening of the box, and Henry being welcomed to Philadelphia, and a new life of freedom.

While Levine’s telling ends here, sharing an author’s note to fill in a little more detail, Henry’s story goes on.

Those present for Brown’s emergence from his cramped quarters into a new life recall his first words as being, “How do you do, gentlemen?” He then sang a psalm from the Bible that he had previously chosen for the moment he first tasted freedom.

Becoming active in the abolitionist movement, Brown wrote a book detailing his plan for the eradication of slavery. He travelled the north with a panorama exhibit entitled “Mirror of Slavery,” intent on shedding light on the plight of the American slave.

After the passage of the Fugitive Slave Law of 1850, he was forced to relocate to England in order to avoid capture and prosecution. He continued traveling across Britain, speaking out against slavery and performing on the show circuit, for the next 25 years.

During this time, Brown married a white British woman, and they had a daughter. In 1875, they returned with him to an emancipated United States as a family magic act.

Henry’s first wife and their children remained in slavery, and it is unknown how their lives played out.

Beautifully told in this picture book, Brown’s is the almost unbelievable, yet true story of one man’s yearning for freedom and the heartbreaking journey he took to at last experience it.

Edie Crabtree is an avid reader and the mother of three active boys. She can be reached at [email protected], or on the Facebook page, Under Cover Book Corner.