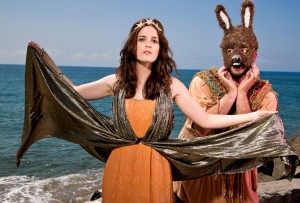 “All the world’s a stage,” wrote Shakespeare.

This weekend, Shakespeare is indeed playing two when Shakespeare by the Sea attempts to hit home runs with its presentations of “Hamlet” and “A Midsummer Night’s Dream” on a stage set up in the outfield of a baseball diamond at Bonita Canyon Sports Park in Newport Beach.

Saturday, July 19 is the Bard’s tragic tale of Prince Hamlet who sets out to avenge his father’s murder, while Sunday, July 20 is the romantic comedy that’s part dream, part fantasy, and wholly delightful.

Of course, a good story is not so good if no one can see or hear you, which are two of the challenges Coffi and her theater troupe face when staging Shakespeare in such a large space as Bonita Canyon Sports Park.

“Fortunately, Newport Beach rents a stage—they’re the only venue that does that. Other venues have a cement slab or grass,” said Coffi. The stage makes it easier for the audience to see the production, she said, while 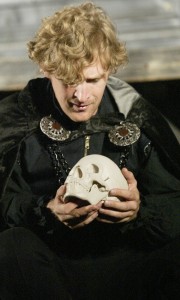 a handful of floor mikes on the stage and large speakers placed at various points in the audience make it easier to hear the dialogue.

“Those speakers really help with large audiences, especially with Newport Beach—it’s our largest venue in both size and the number of people that attend,” said Coffi. “Normally Newport gets more than 1,000 people, while other venues draw 200, 300, maybe 500.”

Both “Hamlet” and “A Midsummer Night’s Dream” start at 7 p.m. and end by 9 p.m., which is a shorter time period than most Shakespeare productions. Coffi said she’s cut the shows down a bit to make them more palatable for outdoor summer audiences. 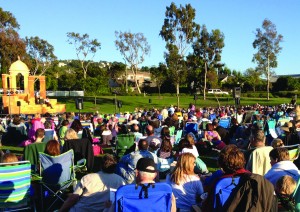 “A few years ago we did “Taming of the Shrew” and it took three hours,” recalled Coffi. “The grass was getting wet, and people did not have the patience for it. Back in Shakespeare’s time people had all day, but for today’s audience, two hours is a good amount of time.”

In addition to the staging challenges, Coffi tries to hire actors who can vocally project, and that are available to perform in both plays (although some actors, such as the one playing Hamlet, are cast in only one show).

Coffi said that Shakespeare by the Sea started by doing only one play, then eventually realized they could use the same series of stage platforms for two plays and just vary the background and colors for each—so they really can “play two.”

Pre-show activities (including a raffle) for “Hamlet” and “A Midsummer Night’s Dream” begin at 6:45 p.m. The curtain goes up at 7 p.m.

Both of these summer events are free and open to the public, supported by the City of Newport Beach and the City Arts Commission.

Attendees are welcome to bring blankets, beach chairs and a picnic dinner.

For more information on Shakespeare by the Sea, visit ShakespeareByTheSea.org.