“Try to remember, the kind of September, when life was slow and oh, so mellow…” 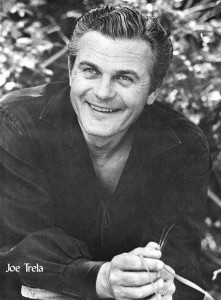 My parents met while performing in a play, so it’s no surprise I have theater coursing through my veins. Make that musical theater, because my dad – whose voice sounded much like that of Robert Goulet – performed in a succession of musicals throughout his life.

My earliest memory of seeing my dad on stage was in the role of El Gallo in “The Fantasticks,” first at The Laguna Playhouse during the summer of 1965, and later in San Diego, San Francisco, Los Angeles, and multiple other towns over the next 20 years.

Having seen the play countless times, it’s no surprise that I’ve memorized most of the dialogue and songs. It’s one of those sweet, charming, simple musicals that weaves memorable music around a universal story about love and longing (as El Gallo tells the audience, the play is about “a boy, a girl, two fathers, and a wall”).

It’s also a wildly popular play: after opening off-Broadway in 1960, it ran for 42 years before closing in 2002. A revival opened a few years later, which is still running. The play has been done in dozens of countries around the world, and thousands of productions have been staged in theaters throughout the U.S. The plays signature song, “Try to Remember,” is considered a musical theatre classic.

South Coast Repertory is the latest local theater to stage “The Fantasticks” (it opens this weekend and runs through June 9).

Knowing that SCR seldom does anything by the book, I talked to actor Perry Ojeda, who plays El Gallo in SCR’s production, to find out what makes this production different–and does different actually work for this play?

“I did one production of ‘The Fantasticks’ (ten years ago) that was pretty much like the original version, but this is not that at all,” Ojeda told me during an interview earlier 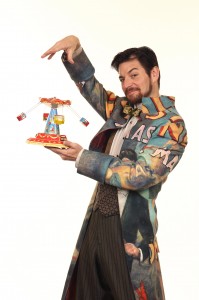 this week. “Not to give anything away, but…the director and creative team have decided to approach this world by having El Gallo introduce and seduce and entertain the audience through magic. You’re surprised by things that appear, so you know that in this world you’d better expect the unexpected.”

“I was at first skeptical, because I hold the original version in such high esteem,” added Ojeda. “When I came to the first rehearsal, I wasn’t sure it was justified. I cannot express what great reservations I had. The show has been running since 1960, so you’d better have a good reason for doing it differently.”

Ojeda said the setting is an abandoned amusement park, and he and another character (The Mute) are like ghosts haunting the amusement pier that tell a story in a magical way.

So does this new concept work?

“Before the first preview, I was not sure if audiences would buy it. A friend of mine saw the second or third preview last weekend, and told me the production really surprised her. She loved it. Audiences love it. The reaction has been…there is rock star screaming. I am startled at how people are reacting to it. The theatre has been packed.”

“If you know ‘The Fantasticks,’ prepare to be delighted and surprised,” stated Ojeda. “Even if musicals are not your cup of tea, this is a musical you need to see–it’s that surprising and delightful. You can bring the entire family. I am surprised when I look out at the audience because there are high school kids and 80 year olds, and everyone in between.”