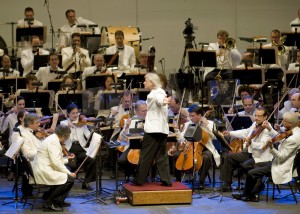 Labor Day weekend signifies the end of summer, and follows certain tried and true traditions. One tradition that has been ongoing for many years is the Tchaikovsky Spectacular, which traditionally closes the Pacific Symphony’s Summer Pops series at Irvine Meadows (formerly Verizon Wireless Amphitheater).

When you combine picnics on the green, a piano recital by Russian pianist, Olga Kern, music led by brilliant conductor Carl St.Clair, and the concluding piece of the night, the “1812” Overture by Tchaikovsky (with cannons and fireworks), it doesn’t get any better.

Starting with the beautiful “Sleeping Beauty,” and then segueing into Stravinsky’s “Firebird” suite followed by Rachmaninoff’s Piano Concerto No. 2 (both with Ms. Kern), it was a magical night under clear skies.

Kern, by the way, is the winner of the famous Van Cliburn International Piano Competition, and has been playing piano since age five. She is the first woman to win the prestigious Van Cliburn award in 30 years.

As always St.Clair was masterful in his conducting as well as engaging the audience with his personality. This event also revealed two new pieces of news.

In an orchestra, especially in the wind section, proper and abundant breathing power is critical, which is a natural alignment with the ALA. Research has also shown that music has the power to ease pain and suffering, and actually help heal some diseases.

The second “reveal” was St.Clair announcing that the Summer Pop Series would be back next year, which addressed the rumors of the Amphitheater closing and possibly being converted into another use, which would be a loss for all music fans.

For those that would rather not wait until next summer to get your dose of classical music, the Pacific Symphony will start its 2015-2016 series on October 1 with the most classical of them all: Beethoven’s Ninth Symphony.