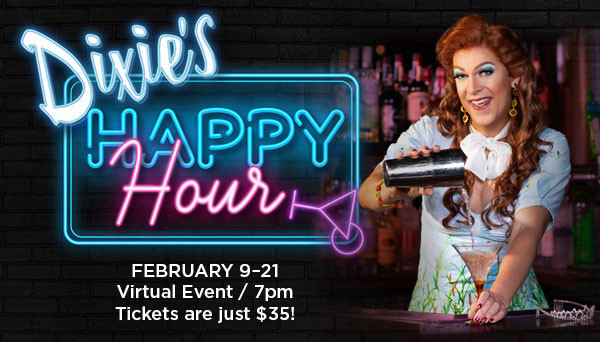 Dixie Longate is back, and she’s owning Happy Hour at Segerstrom Center.

Alabama’s favorite fast-talking, gum-chewing southern belle Dixie Longate performed her smash off-Broadway hit “Dixie’s Tupperware Party” at Segerstrom Center’s Samueli Theatre in December of 2019, and proved she’s as much fun in the OC as she is on – or off – Broadway.

Now, Dixie is back in a new show, “Dixie’s Happy Hour,” with virtual performances every night from Feb. 9 through 21 at 7 p.m.

Dixie gone digital, and according to the folks at Segerstrom Center, which is hosting “Dixie’s Happy Hour,” this 95-minute show includes new stories from Dixie, who’s mixing up a few cocktails and challenging you to find the Happy Hours that are right in front of you but you may be overlooking.

What do you get when you mix gin, rum, vodka and tequila together? According to Dixie, “if it doesn’t lead to you doing something where you have to scroll through your photos from last night to find who you need to bake apology cupcakes for, then if you squint in just the right way and change your focus, you’ll see the glory in you that makes you the remarkable person you are.”

Tickets for “Dixie’s Happy Hour” are $35 per household, perfect for gathering in small and distanced family groups in the comfort of your living room or as one of simultaneous cocktail parties with festive friends in other locations. 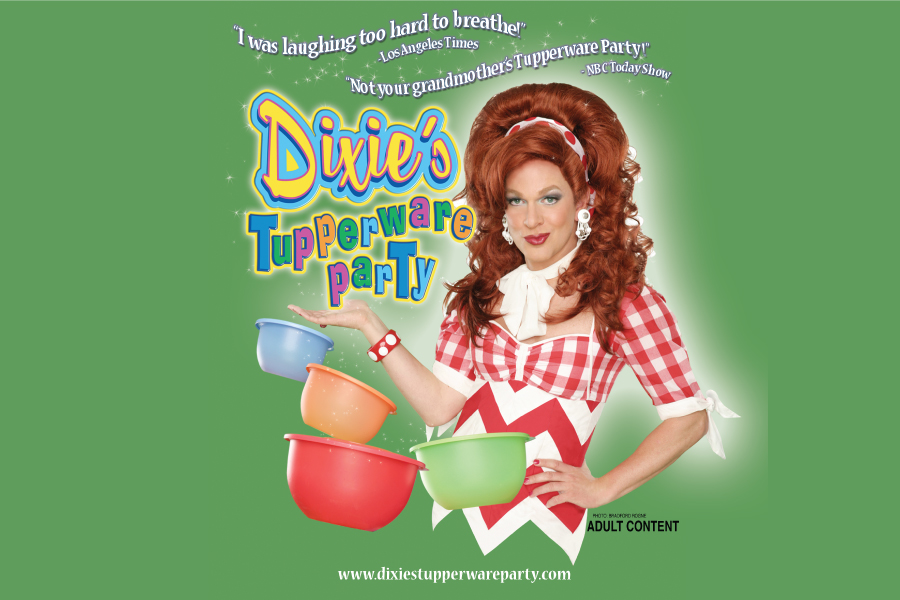 And for those unfamiliar with Dixie, here’s her “official” bio: She hails from Mobile, Alabama where she lives with her three kids who she’s almost sometimes ever proud of: Wynona, Dwayne and Absorbine, Jr. She also has three ex-husbands, but who’s counting.

She started selling Tupperware as part of the conditions of her parole back in 2001. Within a few years, she became the top selling Tupperware representative in the US. When a friend of hers told her she should turn her living room party into a theatrical show, she laughed so hard at the idea, she almost had to put down her drink.

Dixie’s Tupperware Party opened off-Broadway in 2007 to raving fans and rave reviews. The show earned Dixie a Drama Desk Award Nomination for Outstanding Solo Performance. She lost to Laurence Fishburne. Can’t have everything.

The following year, with plastic bowls in hand, she embarked on a small tour to a handful of theaters in the US. Twelve years later, that tour was still running and has become one of the longest-running Off-Broadway tours in history. COVID put a halt to the live shows for the time being, which meant Dixie had to go back to her trailer in Mobile to spend time with her kids 24/7.

“Dixie’s Happy Hour” is her third major show. Her second show, “Never Wear a Tube Top While Riding A Mechanical Bull (and 16 other things I learned while I was drinking last Thursday)” was originally produced by the Denver Center for the Performing Arts.

For more information about Dixie’s Happy Hour, log onto http://DixiesHappyHour.com.

Spoiler alert: According to Wikipedia, Dixie Longate is the alter-ego/drag persona of American actor, writer, comedian, and drag performer Kris Andersson. Andersson’s role as “Dixie” began as a dare in 2004 from a friend to sell Tupperware while in drag. Andersson accepted the challenge, and went on to become Tupperware’s top sales representative in both the United States and Canada while developing the show.

But back to “Dixie’s Happy Hour.” At this show, you ain’t just whistling Dixie—you’re drinking with her!