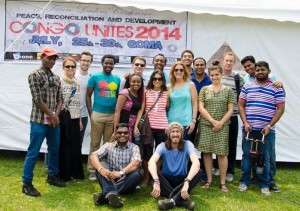 Mariners Church recently sent two relief teams to The Democratic Republic of Congo in response to escalating civil war and violence in the country.

Mariners has a ten-year partnership with Camille and Esther Ntoto, who both grew up in the Congo before going to graduate school in California.

The Ntotos felt God wanted them to return to their country to establish a relief organization and a church in Goma, one of the toughest cities in Congo.

“Camille and Esther are founders of Africa New Day Church,” said Christian Mungai, pastor of Global Outreach at Mariners. “They are incredible. They are choosing to live in the tough part of Congo and do what they can to help at the end of a 24-year war. The victims of rape and violence there have such an eternal perspective on life which gives them the impetus and purpose for living even when they have been insanely violated. It’s such an important reminder to those of us who can get so caught up in our own little world. Being around them speaks powerfully to God’s greatness and people’s resilience, and also to the beauty of hope.”

Mungai, a Kenya-born pastor, led the two teams. He explained that the first team focused on legal aid and consisted of four lawyers who want to use their gifts and education to help the church with justice issues.

They collaborated with ALARM (an organization that pursues justice issues in regions of conflict) to conduct a three-day conference in Goma, teaching on subjects of sexual violence, servant leadership, and the International Criminal Court.

Mungai said the second team consisted of six people, including two filmmakers, who joined the Ntotos and other church partners from Congo, Uganda, Kenya and Sri-Lanka by helping host the first Congo Unites 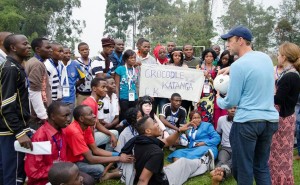 Conference. Mungai was one of the speakers at the conference.

The conference is a youth-led racial reconciliation event inspired by a similar movement at a Mariners partner church in Sri-Lanka. The vision for the Congo Unites Conference is “To unite the youth of all tribal and religious groups across Congo in a movement which provides hope and promotes reconciliation, creating a peaceful and prosperous nation for future generations.”

The Democratic Republic of Congo is a large country in Central Africa where war has raged for the past two decades. Six million people have died as a result. It has also been called the world capital of sexual violence, and children have been enrolled in the army. Disease, conflicts and a myriad of problems have made it one of the most dangerous places on earth.

Christian said goals of the conference include inspiring, equipping and empowering young people from different tribes and backgrounds to break down stereotypes and start working towards peace, conflict resolution and pursuing development through entrepreneurship.

“The conference brought 240 young leaders together from 11 provinces in Congo,” Mungai explained. “They formed a national council and identified regional heads who will lead local chapters in the 11 provinces. Their goal for the year is to recruit 30 other members to their local chapters and those 30 to recruit ten. They’ll be trained and learn what is means to pursue peace and conflict resolution and inspire them to engage in development efforts by finding solutions to their social issues.”