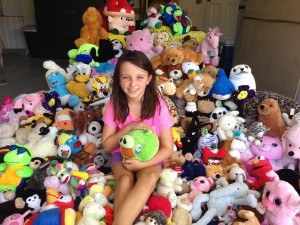 I was captivated by an email on our neighborhood website that said, “My name is Maggie Marr and I will be entering 4th Grade at Andersen Elementary. I will be collecting newer and gently used stuffed animals to donate to SAFE (Stuffed Animals For Emergencies).”

She called her project Stuffed Hearts. I exchanged emails with Maggie and her father and we met after they’d collected and delivered the stuffed animals to SAFE.

“I had mornings off in the summer and I wanted to do something to help kids in tough situations,” said nine-year old Maggie. “My neighbors are in Helping Hands at church and I wanted to do something like that and make a difference. Once at their house I saw a bunch of toothbrushes in a bag and when I asked what they were for, they told me they buy toothpaste and toothbrushes to give to the homeless. It made me think if I did something like that, then I could make a difference too.”

“I thought about how many people have stuffed animals they don’t need any more,” Maggie continued. “My sister and I had so many stuffed animals that we made a family rule that if you get one you have to give two away. My dad went online and looked at different places we could take them like hospitals and women and children’s shelters.

We tried CHOC hospital first, because Mrs. Evans, my teacher last year, has a daughter named Piper who has cancer and goes to CHOC. I think she is better now. But CHOC can only have brand new stuffed animals because older ones carry germs.”

Tom Marr, Maggie’s father, found SAFE, which accepts gently used stuffed animals, and learned that the closest chapter is in Long Beach, but has a collection site at the Boys and Girls Club in Eastbluff.

SAFE was founded in 1997 by Cammie Sanders, who became Ms. Florida US Continental in 2002. She wanted to give children joy and comfort during troubling, traumatic or transitional times. SAFE chapter members collect stuffed animals, toys, books and blankets to be redistributed to emergency organizations, children’s services, hospitals, homeless shelters and other places that help children during times of crises.

“We’re very thankful to live where we live, to have what we have, and we thank God every night in our prayers,” Tom said. “We feel like it’s almost our duty to give back; it’s something we really need to do. We are really blessed to be here.”

“People were really generous,” Tom continued. “One teenage boy wrote a note with his stuffed animals saying he’d loved these animals for a long, long time, but doesn’t use them anymore. He said he wanted them to go to someone else who will love them.”

I asked Maggie how many she gave away, and if it was hard to do. I also asked why she called it Stuffed Hearts.

“I gave 42 away,” she said. “They each had names. It was a little bit hard, but it made me feel good. We hoped to collect 250 stuffed animals. But by the time it was all over, we had 419. We couldn’t believe how many stuffed animals people have and how happy they were to give them. People said they thought it was so cool that we were trying to help other people.”

“I named it Stuffed Hearts because it was about stuffed animals,” Maggie said. “I wanted the kids who get them to have full hearts.”