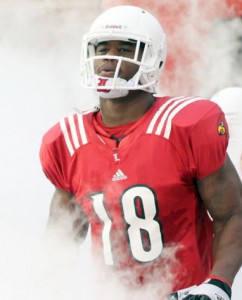 University of Louisville tight end Gerald Christian got more than he bargained for at this year’s NFL Draft held last weekend. After being selected as the final draft pick by the Arizona Cardinals, Christian soon learned that he was the recipient of another title: Mr. Irrelevant 2015.

As Mr. Irrelevant, Christian will become the center of attention during Foundation for the Undefeated’s 40th Irrelevant Week, an annual celebration in Newport Beach that honors the last draft pick of the NFL.

Irrelevant Week is the cornerstone event of The Foundation for the Undefeated, an organization that promotes stories of perseverance and raises funds for organizations such as Special Olympics Southern California.

While participating in Irrelevant Week, Christian and his family also will be treated to a weeklong celebration in Newport Beach including an All-Star Banquet, a trip to Disneyland, and other activities.

Christian’s story is an inspirational testament of hard work and perseverance, perfectly aligned with The Foundation for the Undefeated’s mission to celebrate exceptional athletes on and off the field.

Christian was a four-year starter for his high school football team while carrying a 3.8 GPA. He began his college journey at University of Florida and later transferred to the University of Louisville. During his two seasons with Louisville, Christian caught 60 passes for 810 yards and 10 touchdowns, was selected for third-team All-Atlantic Coast Conference in 2014, and was considered one of the best tight ends in college football.

“We’re so excited to announce Gerald Christian as the 40th Mr. Irrelevant, and to celebrate his well-deserved opportunity with the NFL,” says Irrelevant Week founder, Paul Salata. “His hard work, commitment, and determination will encourage aspiring young athletes to relentlessly pursue their own goals.”

The Foundation for the Undefeated will honor Christian at the 40th Annual Irrelevant Week that starts on Tuesday, July 7. The Balboa Bay Resort will host Christian and his family for the duration of their stay. The Christian family will enjoy a beach party, sightseeing Newport, a sailing regatta, a ride in the Goodyear blimp, and an all-star banquet, where Christian will be presented with the coveted Lowsman Trophy.