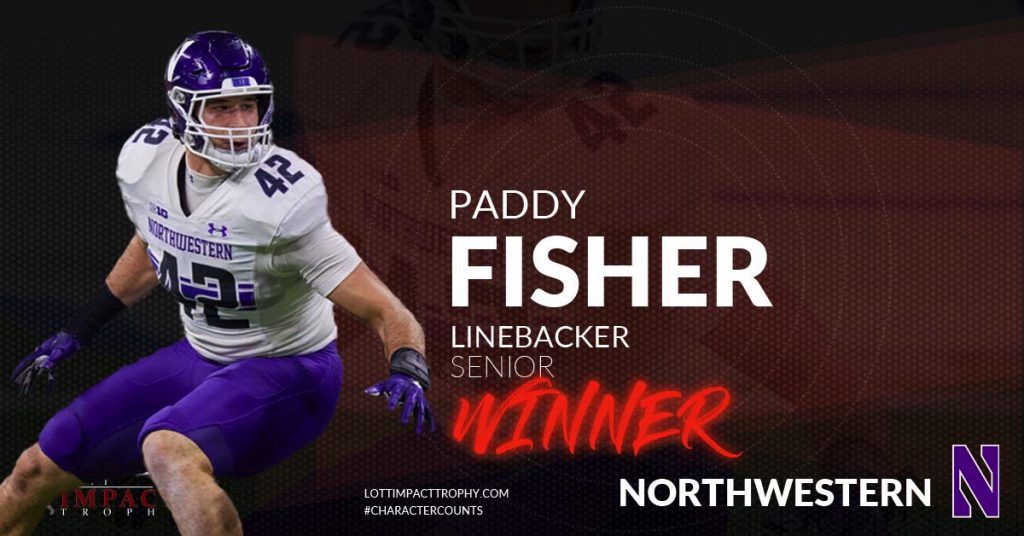 Northwestern linebacker Paddy Fisher has been named the winner of the 17th Annual Lott IMPACT Trophy.

The announcement came Sunday night at the Pacific Club in Newport Beach, at the Lott IMPACT Trophy Annual Award Show.

The award goes to the defensive player who has the biggest IMPACT on his team. IMPACT stands for Integrity, Maturity, Performance, Academics, Community and Tenacity.

Fisher is an All-American linebacker that was also named Big Ten Linebacker of the Year. During the 2020 season, Fisher recorded 86 tackles, 4.5 tackles for loss, one interception, a forced fumble, and a fumble recovery.

Fisher is a three-time team captain, Academic All-Big Ten and Big Ten Distinguished Scholar. In his career, Fisher received All-Big Ten honors three-times on the field, to go with 404 career tackles, the most among active players. Fisher is also involved in numerous local charities.

The Pacific Club IMPACT Foundation will present a $25,000 check to the general scholarship fund at Northwestern in recognition of Fisher’s achievement.

The Lott IMPACT Trophy was named in honor of Ronnie Lott, a two time All-American for USC and College Football Hall of Fame Inductee. Ronnie Lott went on to win four Super Bowl rings with the San Francisco 49ers, ten trips to the Pro Bowl and a spot in Pro Football’s Hall of Fame. He was a leader who made an IMPACT both on and off the field and continues to exemplify character in his personal life.

The mission of The Pacific Club IMPACT Foundation is to recognize and support both national and local charities that serve the youth of America with a focus on education and have a positive IMPACT on the lives of young men and women.

The Lott IMPACT Trophy has become a symbol of the positive attributes many college athletes represent. Several LIT alumni have gone on to excel in areas outside of football including medicine, business, broadcasting and charitable work.