Something Peachy at Oak Grill

August is National Peach Month, and Oak Grill restaurant at The Island Hotel is celebrating all month during lunch and dinner with a special peach cocktail and specialty dessert.

There’s another reason to check out Oak Grill this month: Slow Smoked Sundaze has returned every Sunday from 5 to 9 p.m.

For $38, select an entrée from a list that includes a starter (try the jalapeno cheddar cornbread), entrees such as baby back ribs, fried chicken and whole-grilled branzino, choice of two sides (we love the creamed corn and the mac and cheese), and down-home desserts. Wash it all down with the watermelon mint lemonade, which is terrific on its own but we recommend spiking it with vodka for an extra $10. 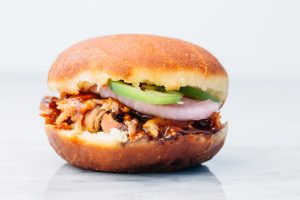 We’ve been fans of Sidecar Doughnuts in 17th Street in Costa Mesa since before they opened (they served doughnuts on Saturday mornings from their test kitchen while perfecting recipes prior to opening), so we’re happy to hear that Sidecar is now open until 9 p.m. on Thursday nights and 6 p.m. on Sundays.

For the month of August, Sidecar features a Malasada doughnut topped with slow-roasted pork, house made Carolina-style BBQ sauce and cole slaw. 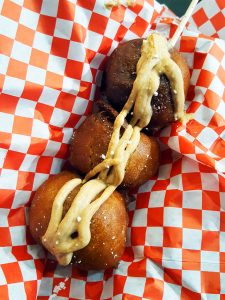 Fun with Food at the OC Fair

The OC Fair is renowned for having some of the most unusual (some might say crazy) food you can find anywhere, but fairgoers certainly ate it up this year.

According to statistics released by the OC Fair, the Bacon A Fair stand sold 4,900 “Unicorn” Pork Legs, and fairgoers bought 20,000 pounds of bacon.

Over at the famous Chicken Charlie’s stand, they sold 6,000 Fried Peanut Butter Meatballs (which we thought were sensational), 4,000 Krispy Kreme Ice Cream Chicken Sandwiches (we loved this one too), 4,500 Funnel Cake Burritos, 15,000 Pupu Wings and 6,000 Luau Chimichangas. And Juicy’s sold 40,005 turkey legs.

Back Bay Bistro at Newport Dunes has launched a Summer Social Hour from 4 pm to close Tuesday through Sunday, offered only in the bar area, which has views of the Upper Newport Bay.

Every day is a fun day at Ruby’s Diner. Our go-to spot is the original Ruby’s at the end of the Balboa Pier (which opened in 1982), especially for breakfast—their cinnamon roll French toast is delicious.

Families love Ruby’s, which is why they have their Tuesday Family Nights when kids 12 and under eat for free from 4 p.m. to close.

On August 19 from 2 to 3 p.m., enjoy live music from children’s band Jelly of the Month Club, plus free activities such as a balloon artist.

On Saturday, August 26, from 3 to 5 p.m., the family fun continues with more live music and an opportunity for kids to have their photo and fingerprints taken by the Orange County Sheriff Department.

This promotion is only at the Ruby’s at Laguna Hills Mall, but may expand to other locations soon, so visit Rubys.com for more information.